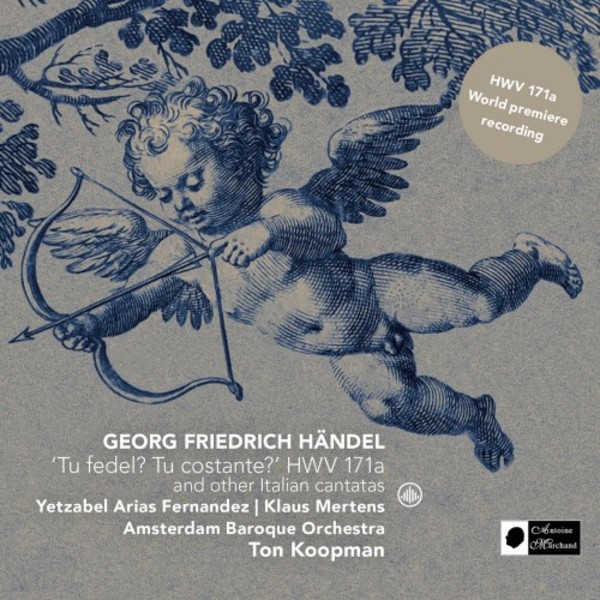 Ton Koopman and his Amsterdam Baroque Orchestra return after a long period to the world of the cantata with a disc which sees them record Italian cantatas by Handel for the first time, including the world premiere recording of Cantata HWV 171a.

Sometime in late 1705 or 1706 Georg Friedrich Handel, like many German composers before him, travelled to Italy, then the fountainhead of European music. During the next three years he paid extended visits to Rome and also spent time in Florence, Venice and Naples. In 1709-10, he returned once again to Florence and Venice. Rather than studying with some Italian master, as others had done, he quickly established himself as a virtuoso performer and composer, enjoying the support of leading patrons and composing numerous cantatas.

Lost music from Handels years in Italy rarely comes to light, but in 2015 a previously unknown and largely different version of the cantata Tu fedel? tu costante?, HWV 171, was discovered by chance, uniquely preserved in a manuscript belonging to Ton Koopman. A complaint of an injured love, both Handel settings of this text are for soprano, but in the new cantata, HWV 171a, the accompanying ensemble includes an oboe and after the first aria, it sharply diverges from the familiar version. HWV 171a was probably composed in Venice or Florence in late 1706.

Organist, harpsichordist and conductor Ton Koopman, one of the worlds leading exponents of Baroque music, founded the Amsterdam Baroque Orchestra in 1979. They have appeared with him on countless recordings, among them his two most ambitious projects: the complete Bach cantatas, a massive undertaking for which he was awarded the Deutsche Schallplattenpreis Echo Klassik, a BBC Music Magazine Award and the Hector Berlioz Prize, and the Opera Omnia of Bachs predecessor, Dieterich Buxtehude, an edition of 30 CDs recorded between 2005-2014. In 2003 he founded his own label Antoine Marchand, a sub-label of Challenge Classics.