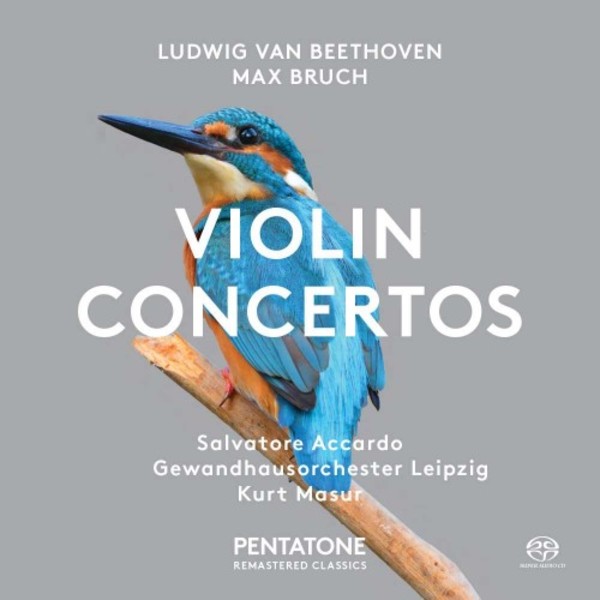 Classic recordings of the perennially popular violin concertos of Beethoven and Bruch performed by the veteran soloist Salvatore Accardo with the Leipzig Gewandhausorchester under Kurt Masur can now be heard for the first time in their vivid, multi-channel original sound in this new release from Pentatone.

First released in 1977-78 on the Philips Classics label, Accardos rendition of the Beethoven Violin Concerto and his masterly survey of the violin concertos of Bruch were praised by critics for the luminous playing and for Masurs sensitive and nuanced accompanying.

Although recorded in multi-channel sound, these classic performances in the repertoire have previously been available only in the conventional two-channel stereo format. Using state of the art technology which avoids the need for re-mixing, Pentatones engineers have remastered the original studio tapes to bring the performances to life as originally intended: in compelling and pristine multi-channel sound.

Famous for his heartfelt and searching interpretations of the Romantic repertoire, the German conductor Kurt Masur, who died in December 2015, was one of the most critically acclaimed and admired conductors of the late 20th century. He recorded extensively for Philips while Kapellmeister at the Leipzig Gewandhausorchester and his account of the Bruch symphonies and the violin concertos with Accardo as soloist were instantly popular with the critics. For Accardo, the Philips sessions also marked the start of his recordings of the mainstream repertoire, previously having dazzled audiences with his landmark recordings of the Paganini violin concertos.

For their programme, it comes as a surprise to learn that Beethovens lyrical and serene Violin Concerto, op.61 was rather indifferently received in his lifetime. The same however could not be said of Bruchs arresting Violin Concerto No.1 in G minor, op.26 whose popularity the composer would later live to regret as it overshadowed his other works. Nevertheless both concertos are firmly established as favourites with audiences and players alike. And these inspired performances, here in glorious, multi-channel sound, will no doubt win over a new generation of discerning audiophiles.