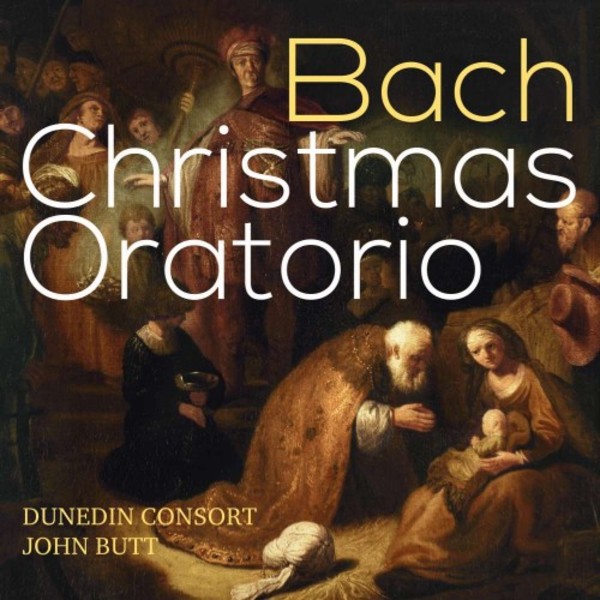 The Dunedin Consorts acclaimed soloists are Mary Bevan, Clare Wilkinson, Nicholas Mulroy and Matthew Brook (Cantatas 1, 3, 6), Joanne Lunn, Ciara Hendrick, Thomas Hobbs and Konstantin Wolff (Cantatas 2, 4, 5). Butt applies his extensive knowledge of Bachs performing practices to present the range of choral scoring that Bach seems to have used, realising something of the implications of the composers performing conditions and decisions.

Ideally positioned to become the must-have Christmas recording of 2016, this seasonal favourite is a welcome addition to the Dunedin Consorts already enviable catalogue.

The Dunedin Consort has established a reputation as one of the finest period performance choirs around, under the direction of prize-winning historical performance specialist John Butt OBE. The multi-award-winning ensemble has won praise for the natural style of its soloists and renown for the virtuosity of its singers. In addition to a Grammy nomination, the Dunedin Consort has won two Gramophone Awards: the 2007 Baroque Vocal Award for Handels
Messiah and the 2014 Choral Award for Mozarts Requiem. Further accolades include: Esther was voted one of the Top 10 Classical Albums of 2012 by The Times, Gramophone included the Dunedin Consort in its Twenty Greatest Choirs list and three of its recordings have been named a Building A Library: First Choice by BBC Radio 3s Record Review.

Bach expert John Butt and his Dunedin Consort, having already set down highly-praised recordings of the Mass in B minor, St John and St Matthew Passions and the Magnificat (the last of which was Europadiscs Disc of the Year 2015), at last reach the Christmas Oratorio. Its a doubly welcome release, as this piece has received rather fewer accounts with the one-voice-per-part approach than its sister works. One reason the Christmas Oratorio has never achieved quite their levels of popularity or devotion (at least in the English-speaking world) is that the basic narrative  taken from St Matthews and St Lukes gospels  is rather thinly spread across the six constituent cantatas, with less opportunity for dramatic involvement. Another is that almost all the works music was adapted by Bach from existing secular cantatas  composed for such events as birthdays of members of the Saxon ruling family. Yet the Oratorio was written at a time when divine and worldly authority were seen as closely intertwined, and Bach succeeds in establishing a mood for each cantata that is not only distinctive but perfectly integrated into the overall story arc.

As a scholar, Butt understands all these matters perfectly (as demonstrated by his excellent accompanying notes); and as a musician, he has an unerring grip on events as they unfold, bringing out the works latent drama while allowing room for reflection. His choice of tempo is as assured as ever, and his use of extra ripienists to double the single voices in cantatas 1, 3 and 6 is intelligently applied. He also uses a different vocal team in the quieter works (cantatas 2, 4 and 5: the ones scored without trumpets and drums), which produces a purer, more reflective sound, enhancing their individual character.

The performance itself is the strongest theres been for years, perhaps even the best theres been in the historically informed performance era. The combined Dunedin forces achieve the excitement of Gardiner without his over-driven, over-regimented sound; the honest earthiness of Harnoncourt without his often exasperating eccentricities of tone, shaping and tempi; the gentle introspection of Herreweghe without his tendency to smooth over the works more dazzling features. Theres certainly no shortage of thrills in the trumpet-dominated works, with full-throated singing aplenty and a resplendent tutti sound. In cantata 4, the horns bray magnificently when necessary, most memorably in the closing chorale chorus, while the magnificent bass aria in the first cantata (Grosser Herr, o starker König), robustly sung by Matthew Brook, is a highpoint, with splendid yet dancelike support.

The use of mezzo-sopranos rather than countertenors for the alto lines is a definite plus, especially when the mezzos are as pure-voiced as Clare Wilkinson and Ciara Hendrick. And its in the quality of the singing  not starry but open and honest  that this recording scores time and again. This is particularly true of cantatas 2, 4 and 5: the angelic soprano of Joanne Lunn, Ciara Hendricks beautifully judged più piano at the beginning of the da capo in Schlafe. mein Liebster, the meditation on the name Immanuel in cantata 4, and the ravishing trio Ach, wenn wird die Zeit erscheinen? in cantata 5 are among the many highlights in performances of constantly alert sensitivity. Special mention also for tenor Thomas Hobbs, whose tireless, gently-toned athleticism does so much to animate the arias Frohe Hirten (part 2) and Ich will nur dir zu Ehren leben (part 4); he and Nicholas Mulroy make memorable co-Evangelists.

The obbligato instrumental playing throughout is marvellously accomplished, especially violinist Cecilia Bernardini, flautist Katy Bircher, and principal trumpet Paul Sharp. And the continuo team, with Butt himself at the harpsichord and Peter Whelan, no less, on bassoon, would be the envy of any other ensemble. (Theres lovely use of the harpsichords lute stop in the echo aria Flösst, mein Heiland in cantata 4.)

Above all, its the sense of committed yet un-posturing devotion and sheer joy that makes this performance so extraordinarily successful. Beautifully recorded and presented, and fastidiously researched, its hard to imagine the Christmas Oratorio being better served than this.

Its surely one of the finest accounts now available of Bachs Christmas Oratorio.  The choral sound is pert, sinewy, unforced; the instrumental playing is punchy, broad and charismatic. Butts navigation of the sprawling six cantatas is tremendously enjoyable  its not just how he handles tempo and gait to make us feel the character of individual movements, but how he turns corners and paces the big picture.  Kate Molleson
The Guardian 20 October 2016

This is the latest in an acclaimed series of Bach recordings by the Edinburg-based Dunedin Consort. It has the same sense of freshness as previous releases, with one singer to a part except in the three cantatas which use trumpets, where there are two. This leads to a pleasing transparency of texture, and nimbly sprung rhythms under John Butt's scholarly direction.  Terry Blain
BBC Music Magazine Christmas 2016