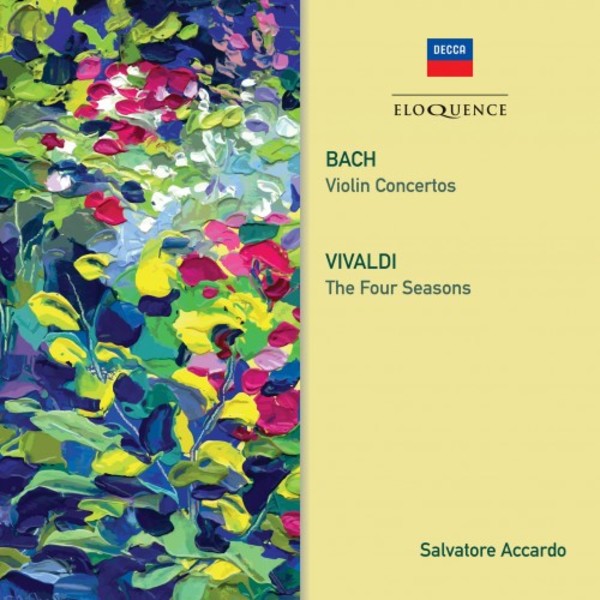 For all the popularity and reinvention that now surrounds Antonio Vivaldis collected violin concertos known as The Four Seasons, it is difficult to believe there was a time when they were completely unknown. Like Vivaldi himself, whose once lofty reputation fell into complete obscurity following his death in Vienna in 1741, The Four Seasons travelled through the eighteenth and nineteenth centuries utterly forgotten, lying in musical obscurity until Vivaldi and his works were rediscovered in the 1930s and 1940s.
Since then, The Four Seasons has risen to the top of Vivaldis oeuvre, performed and recorded routinely throughout the world, almost single-handedly placing Vivaldis reputation among the greats. Salvatore Accardos award-winning recording here features performances on instruments made by the famous Antonio Stradivari. Spring features the 1715 Stradivari violin known as Il Cremonese, once owned by Joseph Joachim and now in the possession of the City of Cremona. Summer features the 1727 Stradivari violin known as the Ex-Raynier. Autumn features the 1718 Stradivari violin known as the Firebird. Winter features the ex-Francescatti 1727 Stradivari violin known as the Hart. All three of these instruments are (or were at the time) owned by Salvatore Accardo, who brings the particular qualities of each of the four instruments to full effect in these concertos.
Like Vivaldi, Johann Sebastian Bach was raised in a musical household and taught violin by his father from a young age; unlike his Italian counterpart however, Bachs contribution to the violin concerto repertoire is minimal, with only a handful of well-crafted, beguiling gems having survived. Included here are the A minor, E major and the Double Concerto, but this selection extends to include other concertos Accardo recorded in 1985 with the Chamber Orchestra of Europe  the Concerto for Violin and Oboe, as well as rare arrangements of the F minor and D minor keyboard concertos, the latter arranged by Accardo himself.
This is a recording that happily bridges the divide between middle of the road and authentic and one that should please devotees of either species; it conveys, vividly but not theatrically, the spirit of the music  and without misrepresentation. - Gramophone, December 1988 (Vivaldi)
Philips offers superior recording - Fanfare, July/August 1987 (Bach)