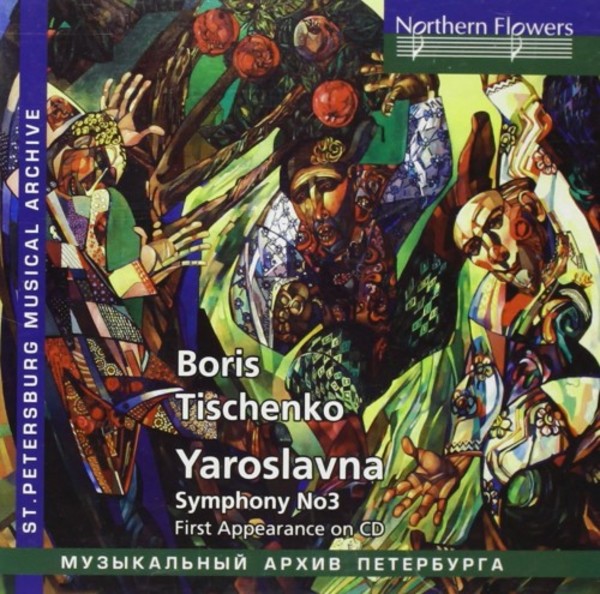 Among the works of Boris Tishchenko widely performed by prominent masters of Russia and Europe are ten symphonies, Requiem to poetry by A. Akhmatova, concertos for different sets of instruments, ten piano sonatas, four sonatas for string instruments solo, sonata for block flute and organ, Twelve Inventions and Twelve Portraits for organ, and five string quartets; ballets Yaroslavna, Tsokotukha the Fly after Korney Chukovsky, and The Twelve after the poem by Alexander Blok, the opera The Stolen Sun and operetta The Giant Cockroach after Korney Chukovsky, vocal cycles, suites for orchestra and for piano, compositions for different instruments and choirs a cappella, music to theatrical performances and films, and editions and reconstructions of works by other authors. In recent years, the composer has been working at a choreosymphonic cycliade titled Beatrice, after Dantes Divine Comedy. Tishchenko has been awarded with the M. I. Glinka State Prize of Russia (1978) and other prestigious prizes; he is National Artist of Russia (1987).

One of the most important works of Tishchenko is his ballet Yaroslavna inspired by The Tale of Igors Campaign, Russias great monument of literature dated the 12th century, which has always attracted creators of diverse kind of arts since its recovery in the early 19th century. The premiere of the ballet on the stage of Leningrad Academic Maly Opera and Ballet Theatre was held on 30 June 1974. The catalyst of the unusual, daring production was the theatre itself, which has been inclined to experimenting for many decades of its existence. The libretto was written by the theatres chief ballet master Oleg Vinogradov, who contributed to the production not only as choreographer, but also as stage designer.

The Third Symphony of Boris Tishchenko consists of five movements. The first four are interlinked and form Meditations. The fifth movement, Postscript, is somewhat estranged, which may be explained by the idea to relieve the strain and drama of the preceding movements.