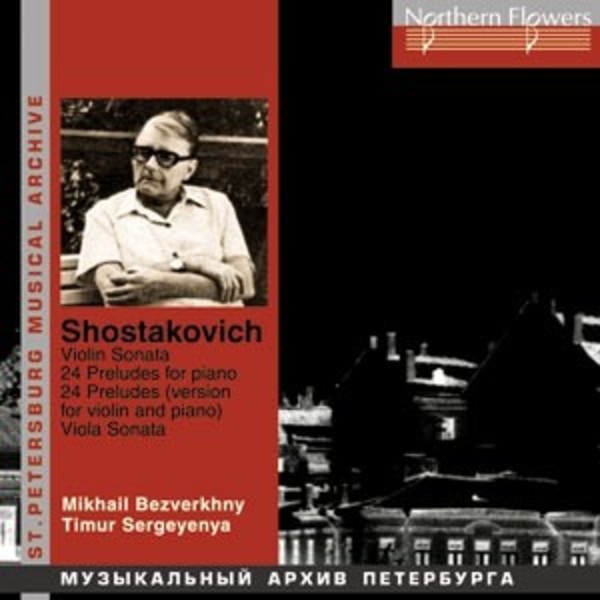 Violinist Mikhail Bezverkhny was born in Leningrad in 1947. He finished the Special School of Music of Leningrad Conservatory (class of Yakov Ryabinkov). In 1965-70 he studied at Moscow Conservatory with Prof. Yuri Yankelevich, an outstanding violin teacher of the 20th century. He is a prize-winner of six international competitions, such as the Weniawski, Montreal, and Queen Elizabeth, as soloist and as a member of the Moscow Trio. He has toured in dozens of countries of Europe, Asia, and America, and has recorded over 40 LPs and CDs. He has been living and working in Belgium since 1990. Mr. Bezverkhny is a professor of Ghent Conservatory. He is also known as viola player, composer, and cinema actor.
Mikhail Bezverkhny is a well-known interpreter of works of Dmitri Shostakovich. When still a student, in 1967, he contributed to the premiere of Shostakovich's vocal cycle to words by Alexander Blok together with singer Margarita Miroshnikova and cellist Natalia Gutman. It was then that he met the composer, in whose Moscow home this composition was rehearsed. Later, Bezverkhny was an initiator of readdressing long-forgotten arrangements by Shostakovich of popular melodies by 19th-century classics. He has performed these arrangements in Leningrad, Moscow, and Kiev with pianist and musicologist Sophia Khentova, singer Larissa Shevchenko, and other musicians. From 1993 till 1999, Bezverkhny was a member of the Shostakovich Trio, where the core of the repertoire were works of the great composer. The recital playbill of the musician features all the violin compositions of Shostakovich.
Timur Sergeyenya was born in Minsk in 1969. He graduated from the State Conservatory of Belorussia, where he studied with Prof. Irina Tsvetayeva and Prof. Valery Shatsky, and was on probation with Naum Shtarkman, professor of Moscow Conservatory. In 1996-99 he was Assistant Professor at the Conservatory of Belorussia. He has published several research articles on psychophysical training of a musician for concretizing, which were related to his long-time devotion to Oriental combat arts. He has been living in Germany since 1999. Mr. Sergeyenya has performed with piano recitals in countries of Western and Eastern Europe and America (over 1,500 concerts in 25 years of performing). He continuously plays in ensembles, and in particular with Mikhail Bezverkhny since 1999, first in the Shostakovich Trio, and afterwards in a duo. Since 2001 he has been producer of the annual festival of music in Uerdingen, Germany.
The repertoire of Timur Sergeyenya comprises all the piano opuses of Shostakovich.