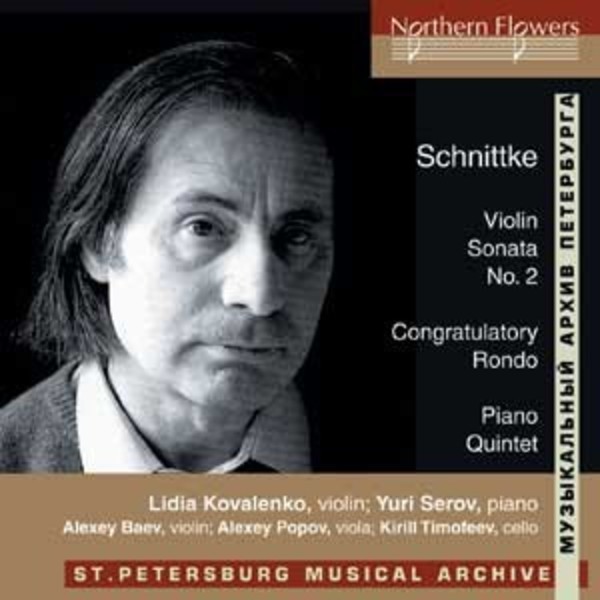 Today, it is not doubted any more that Alfred Schnittke has become one of the most important composers of the 20th century, his music deeply and vividly reflecting complicated cultural processes of our times. In the contradictory and kaleidoscopic style environment of the second half of the last century, Schnittke found his own inimitable way of continuous development, search, and discovery. Deep personal feeling, the scope of goals set, search for answers to crucial questions of our existence, striking convincing power, and technical perfection of most mature works of the composer have attracted more than one generation of music lovers worldwide, making them listen and think. Alfred Schnittke said once that art always begins in man and ends in man ("Attitude to man is important, not the style".) The works presented in this program illustrate this most relevantly.
The Second Violin Sonata by Alfred Schnittke begins with an abrupt piano chord, like a rifle shot. It blows up the silence and the very notion of the style, established in many centuries. It is the start of the Polystylistics era in the works of Schnittke, and moreover, for the Soviet music in general. The subtitle given by the composer to his work is "quasi una Sonata", echoing Beethoven's eternal "Moonlight Sonata", Sonata quasi una Fantasia. Beethoven in his masterpiece steps out into the domain of the Romantic music, being unable to stay within a classical sonata's framework. Schnittke, on the contrary, is annoyed with the sonata form as such. The contradictions and contrasts are too strong, and just the startling freedom of utterance should lay a foundation for setting up something new.
The Congratulatory Rondo was written in 1973 for the 50th birthday of Rostislav Dubinsky, fist violin of the famous Borodin Quartet. The piece styled as a Viennese classic strikes you as something belonging to quite a different epoch. Is it Mozart? Or some violin sonata finale by Schubert that we have forgotten? One year before, Schnittke had already tried his ability in musical "disguise": his Ancient Style Suite for violin and piano (cembalo) also disappoints the audience with a surprisingly fresh attitude towards classics. Of course, the composer impersonates 'ancientry', making an excellent stylization and obviously happy to assume the similitude of a master of the late 18th or early 19th century. But it is also a beautiful message of love to the bygone era, confessing that Beauty and Harmony will never come back again in their initial and pure state as they were embodied by great artists of the past.
The Quintet for Piano, Two Violins, Viola, and Cello is among the most important works of Alfred Schnittke. The quintet dedicated to the memory of the composer's mother who died in 1972 was long and difficult to accomplish; it took nearly four years, with intermissions. "I tried to build something shapely, where everything would be carefully balanced and measured. I kept on failing. Finally, I put all the versions aside and started to compose. It looked as if I was learning to walk, from one note to another. I had to almost grope my way  Finally I got a piece that is steady enough in its dynamics and tempos. The music is mostly soft and slow. The five parts of the cycle follow without a pause and almost do not contrast each other in their material." This is how the composer himself commented on his writing the piece.
Recorded at the St Catherine Lutheran Church, St Petersburg, 24 April & 18 July 2001