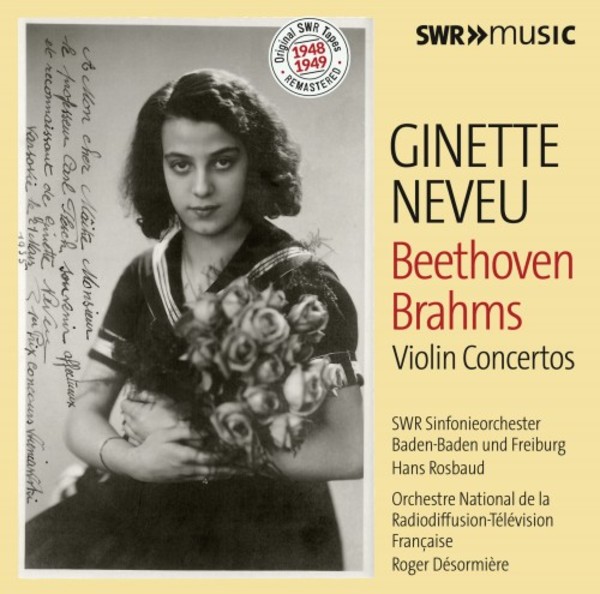 In the light of her untimely death, Ginette Neveus artistic achievements are legendary; she is remembered both for her outstanding personality and her prodigious talent. She was the worlds first great female violinist, adored everywhere and critically acclaimed for her virile playing that combined irresistible force, passion, intensity, lyricism, sonority and precision.

After her sensational triumph at the Henryk Wieniawski Competition in Warsaw in 1935, her fame spread quickly across Europe, followed by subsequent appearances and accompanying accolades in the Soviet Union, the USA, Canada, Latin America and Australia.

On 20 October 1949 she performed at a farewell concert in Paris, shortly before the start of her tour in the USA. Eight days later, the plane she was flying on with her brother and 46 other people crashed into a mountain on São Miguel Island in the Azores, after two failed attempted landings.

The live recording of the Brahms Concerto in Baden-Baden on 25 April 1948 is pure French Brahms, but subsumed into Ginette Neveus style of combining powerfully fertile ideas with a dreamy spirituality.

The Beethoven Concerto was recorded in Baden-Baden on 25 September 1949 with the Symphony Orchestra of the Southwest German Radio (SWR) under the direction of Hans Rosbaud, just a month before Neveu's untimely death. Few violinists have succeeded in equalling her pure, unsentimental but touchingly unique interpretation of the work.