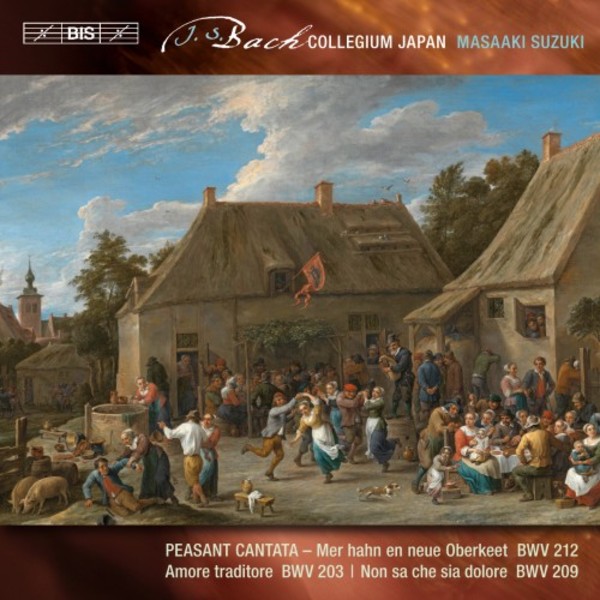 The works on the seventh disc in Masaaki Suzuki's and Bach Collegium Japan's series of J.S. Bach's secular cantatas are quite special in the composer's production. By far the best-known of them, the so-called 'Peasant Cantata', signals this both through its title (in Upper Saxon dialect) and subtitle ('Cantate burlesque')  composed for a celebration at a country estate outside Leipzig, the soloists in this duo cantata portray neither Roman gods nor allegorical figures but a peasant girl and a farm-hand. In broad dialect, and to music that makes reference to folk songs and village music, the two praise the new owner of the estate and his family, but also work in sly digs at the village parson and the local tax collector.

The Peasant Cantata is followed by the only two extant Bach cantatas that set Italian texts. As such, they have been regarded with a certain suspicion by Bach scholars  all the more so as no autograph manuscript has survived of either work. Both works are solo cantatas and both contain a number of surprises for the listener. The longer soprano cantata, BWV 209, is possibly a musical farewell to a young scholar and pupil of Bachs on his departure from Leipzig after completing his degree. While the opening sinfonia, with concertante flute, sounds like pure Bach the two arias are composed in a style that is strongly influenced by Italian opera. In Amore traditore for bass solo, a disappointed lover takes Amor to task, accusing him of betrayal and deception. It closes with an aria of a quite distinct character, with the harpsichord not appearing as a continuo instrument, but instead taking on a virtuoso, concertante role with toccata-like figurations.