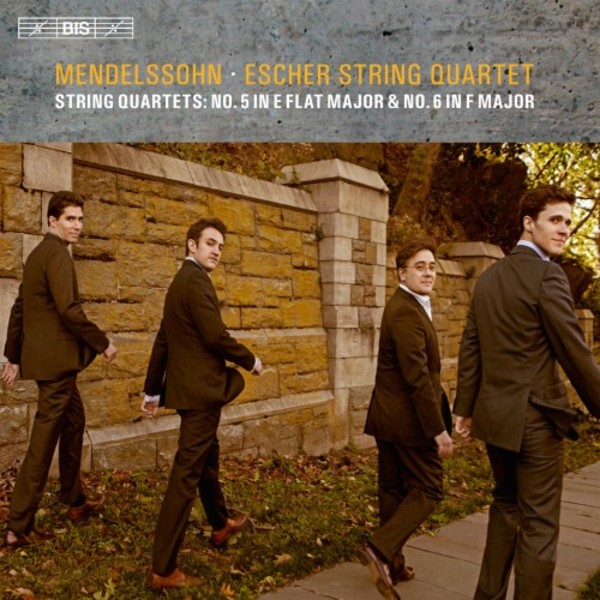 The Escher Quartet opened their traversal of Mendelssohns string quartets with the first and the fourth quartets, along with an unnumbered early work in E flat major, on a disc which the reviewer in The Strad summed up as a A deeply rewarding release  and by any standards a distinguished one. The same magazine made the sequel  with the second and third quartets  its recommendation in the November issue of 2015.

On the third and final disc in the series, time has come for the two last quartets, as well as the Capriccio and Fugue from the Op.81 set of Four Pieces for String Quartet begun on the previous instalment. The String Quartet No.5 in E flat major belongs to the three quartets composed in 1837-38 as Op.44 and is often considered a masterpiece of the genre. Ever modest, Mendelssohn himself recommended the set to his friend, the pianist Ignaz Moscheles, with the words: there are one or two amongst them I am pleased with myself, and I should like to know that I am right, and that you too are satisfied with them.

Published posthumously, the Quartet No.6 in F minor, Op.80 holds a special place in Mendelssohns list of works: not only is it one of his very last compositions, but the breath-taking work is the direct and heartfelt response to the unexpected death of his beloved sister Fanny. The impassioned character of the entire work seems to me to be in keeping with his [Mendelssohns] profoundly unsettled state of mind, Moscheles noted in his diary after having heard the quartet at the composers home on 5 October 1847. A month later, after suffering a number of strokes, Mendelssohn died.

All the performances are very fine, but the Eschers account of Op 81 is truly exceptional, driven by an intensity, and a scarcely concealed rage, that grips the music from the thrilling opening of the first movement and never slackens throughout.  Andrew Clements
The Guardian 9 September 2016

The Escher Quartet have reached the climax of their CD series of the Mendelssohn quartets, with a disc that hits the jackpot in every way. For a start, the programme works very well: the E flat major and F minor quartets make an excellent contrast and the two pieces from the diverse collection that comprise Op. 81 serve as a palate cleanser while also revealing their own sterling quality. ... The Escher Quartet's playing is full of propulsive enrgy that never stints on aguish, but they manage to keep their lightness of touch, letting the music make its points with swift, pure directness.  Jessica Duchen (Chamber Choice)
BBC Music Magazine Christmas 2016