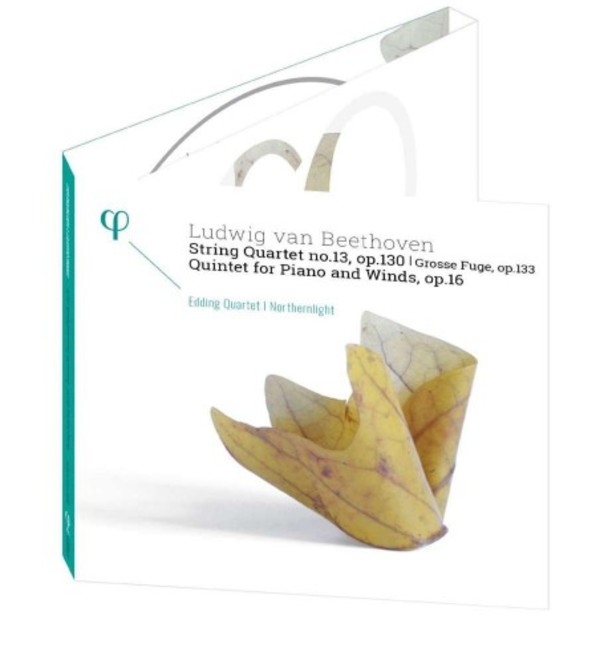 The pairing of the two works on this album is unique in that one comes from the dawn, the other from the dusk of Ludwig van Beethovens career. Indeed, whereas the composer wrote the Quintet for winds and piano, op.16, when he was only 26  the talented young man also excelled as a successful pianist  he did not finish his String Quartet, op.130, until a year before his death. The Edding Quartet proposes here the original version of the work, with the Grosse Fuge, op.133, as finale.
The direct comparison of these two works on the same disc intelligently sheds light on the fantastic distance the composer covered between these two points in time.
Two years after the success of their Schubert album, very warmly received by the press and public alike, the Edding Quartet and Northernlight felicitously join together once again on the same album to give new readings of these masterpieces of the chamber music repertoire. Having become major interpreters of the Classical and Romantic repertoires, the two ensembles offer expert performances, refined and precise, of two of the German composers finest scores.
The late Beethoven quartets are part of those rare monuments in the history of western music whose mystery remains unfathomable. These scores deserve to be read, scrutinised and dreamt again by the generations that follow one after the other in search of a saving absolute. They reveal, first to the musicians then to their audience, what music can express of the most profound, the truest, and most painfully definitive.
Our reading is inspired by sustained playing of early music, a repertoire whose profound richness owes everything to the quality of its contrapuntal architecture shaped by the centuries. Moreover, the use of idiomatic instruments, gut strings, and lighter bows allows for more spoken articulations, a more differentiated palette of colours, and a more transparent texture. But what counts above all is our love of this fata morgana of bitter happiness that filled us during our work and which haunts us still. - Edding Quartet