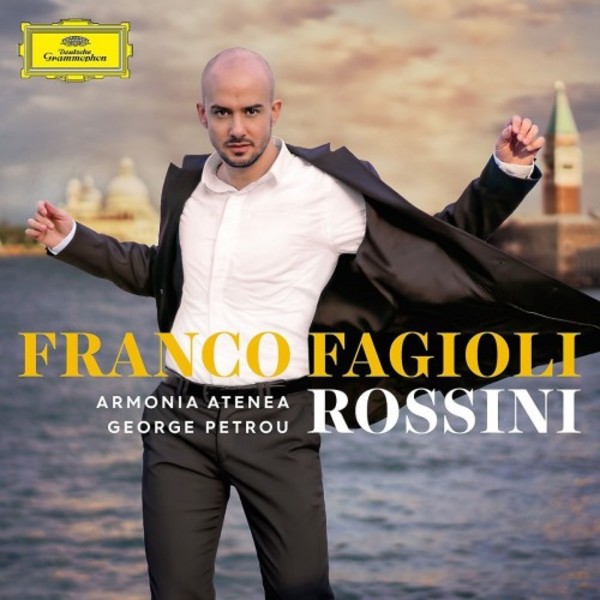 Franco has brought the countertenor voice to a new level, with a sound and technique that nobody thought were possible. He is not only the most unique and virtuosic countertenor but he has one of the most extraordinary voices of the lyric panorama in our days.

He is the first countertenor to sign exclusively to the label in its 118-year history.

Franco Fagioli is a real pioneer as the very first countertenor to complete his training in his native Argentina at the prestigious Instituto Superior de Arte at the Teatro Colón in Buenos Aires in 2003. Trained by bel canto technique teachers, his voice does not know about technical limitations and goes from the very low chest voice until the highest soprano register with ease.

For his debut album on DG, Franco has recorded an all Rossini album. He has chosen so called "trouser roles" that approach the delightful confusion between voice and gender, particularly in Rossinis rarely performed serious operas, with many male characters whose substantial roles were written for women and not for castrati. But the castrato voice fascinated Rossini, their "purity and wonderful flexibility; their profoundly penetrating accent". For Franco Fagioli there is a special appeal to restoring these roles, therefore this album is so far the closest that we can get to the sound that Rossini had in mind and would have wished for this repertoire.

The exceptional bel canto technique that he has developed, makes Franco the ideal choice for this repertoire. The Rossini featured on this album is virtuosic, deep and thoughtful, with arias whose sonorities recall Classicism as well as with colourful and modern ones which anticipate the Verdian operas. With his large, warm and at the same time incredibly agile mezzo-soprano voice, he paints a series of fascinating portraits of characters  for example Siveno from Demetrio e Polibio, and Arsace from Semiramide.

Franco Fagioli has already performed major roles on prestigious stages including the Royal Opera House, Covent Garden in London,  Théâtre des Champs-Élysées in Paris, the Semperoper in Dresden and the Zürich Opera House. In the coming seasons he will be performing the Rossini programme in selected concerts and appear in opera houses such as Aix en Provence (Grand Théâtre de Provence), Paris (Opéra National), Madrid (Teatro Real) and Lille (Opéra de Lille) among others.

Heres a Rossini recital disc with a difference. Star Argentinian countertenor Franco Fagioli  whose praises we have sung before here  takes on a selection of bel canto scenes created by the Italian master for trouser roles normally sung by mezzos. For most countertenors, their voices developed in the sacred vocal repertoire, this athletically florid fare would be virtually unthinkable. For Fagioli, however, this is something of a homecoming: his initial training in his homeland, where he was a pioneer in his vocal range, was in just such music, which is one reason why he sounds so natural in it. Another is the quality of his voice: rich and powerful, yet agile enough to to match the most taxing of Rossinis demands.

It's a fabulous collection of pieces, and what you notice first, inevitably, are the fireworks: the tireless energy of the scurrying scales in the cabalettas, the seemingly effortless climbs to the higher register, or the deep, plummy chest voice. The famous Rossini crescendos and stretti have rarely sounded so exciting. The arias for the Italian ruler Ottone (from Adelaide di Borgogna, 1817) are delivered with particularly imperious confidence, and we even get a stunning high C at the end of Ottones Al trono tuo primiero.

Yet on repeated hearing the cantabiles are just as impressive: Fagiolis tone may at first seem relatively unvaried, but his subtle phrasing and sensitive use of rubato make these more inwardly expressive passages truly memorable. Tancredis Dolci damor parole, with its sensual echoes, is a case in point, as is Arsaces Ah, quel giorno ognor rammento from Semiramide. In both works, Fagioli yields nothing to more traditional performances, but the disc is made all the more valuable for the inclusion of much less familiar repertoire, ranging from the opening track, Pien di contento from Rossinis very first opera, Demetrio e Polibio (1812), to the brilliant closing selection from the pastiche Eduardo e Cristina (1819).

The discs other great strength is the sheer quality of support Fagioli gets from George Petrou and his Armonia Atenea orchestra and choir. Just listen to the way the strings dig in at the beginning of Edoardos Sazia tu fosse alfine (Matilde di Shabran, 1821)! Several individual members step into the limelight for some memorable solos, not least horn player Costas Siskos in the following Ah, perché, perché la morte (with some delicious hand-stopping), and concertmaster Sergiu Nastasa in the gorgeous concertante violin solo of O sospirato lido (Tancredi), a highlight of the disc. Even the timpani get a look in, with violent outbursts in the tempestuous chorus Nel misero tuo stato from Eduardo e Cristina, while the woodwind playing throughout is full of character and life, and the choral work exceptionally spirited. Petrou keeps the rhythms consistently buoyant, and the pacing is as brilliantly judged as one could wish.

However, this is principally Fagiolis disc, and it makes one hungry for more. How wonderful it would be to see him take some of these roles on stage, standing the traditional gender play on its head. With a seemingly natural flair in this repertoire, hes a born Rossinian, and DG have done him proud here. Full texts and translations are included, and the recording, made in the Metropoulos Hall of Athenss Megaron, is exemplary. Unhesitatingly recommended.