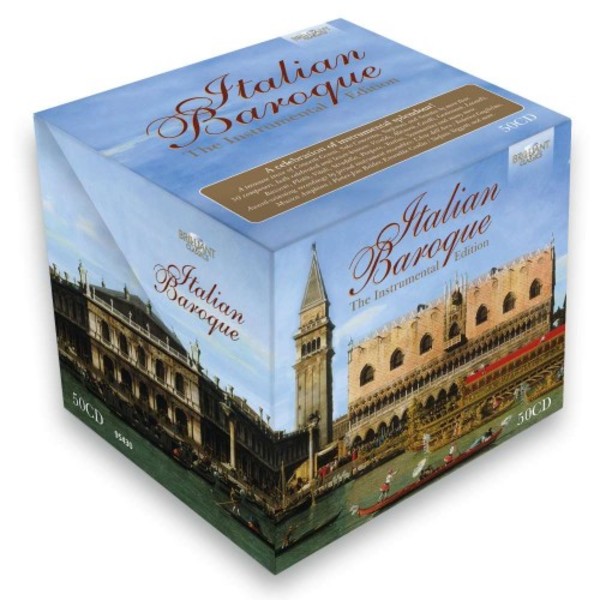 A celebration of instrumental Baroque splendour!

Its hard to overstate the importance of Italian Baroque in the development of Western classical music. This period saw the consolidation of many of the forms so familiar to its canon, along with striking advances in instrumental technique, making this a pivotal era for European instrumental music.

This new and expansive collection includes over 30 composers, many of whom are rarely heard in the concert repertoire, including new recordings of Giuseppe Tartinis Sonatas for violin and Nicola Porporas Sonatas for cello. This release also contains some of the most popular Baroque music today  Vivaldis Four Seasons and Corellis Concerti Grossi are present and correct  along with many under-appreciated works of well known composers; Albinonis skill as a composer is on show in a rare rendition of his Trattenimenti Armonici, and Scarlattis dramatic Sinfonie di concerto grosso also make an appearance.

Concerto, sonata, symphony all terms familiar to the classical music enthusiast. These forms, however, were only just beginning to crystallise during this period. The sonata  emerging in the 1600s from the newly separated bass and treble parts  found its first champion in Corelli, and this release contains many fine examples by other composers too: ranging from Albinonis intricate and melodious Trio Sonatas Op.1, to Giovanni Plattis eminently danceable Sonatas for oboe, and Corellis own masterful set of Violin Sonatas, which set the standard of violin technique for decades to come. The concerto was also established during this era, with Alessandro Stradella being the first known composer to use reduced orchestral forces to accompany solo singers in his operatic works. This idea soon evolved to take on other solo instruments, and became a mainstay of composers such as Vivaldi (who wrote over 200 of them); his rarely heard Oboe Concertos are included in this collection, and Benedetto Marcellos graceful Concerti a cinque Op.1 make an appearance alongside numerous other examples from this period. The symphony  the most revered of all orchestral forms  also came into fruition in the 17th century; Giovanni Battista Sammartini is especially associated with its development, evolving brief, opera-esque overtures into more serious, developmental works  his Late Symphonies, included in this release, serving as striking early examples. This collection even makes room for some very early examples of the string quartet by Pietro Nardini, a composer who straddled both the Baroque and Classical eras, and whose quartets were most conspicuous for their lack of basso continuo.

The development of instrumental technique in the Baroque era saw the arrival of numerous virtuosi, a status virtually synonymous with that of composer. This resulted in works that stretched the possibilities of their instruments  true as much for lesser-known instruments of the period such as the recorder and trumpet as for string instruments. Giuseppe Sammartinis skill as a recorder player is wholly apparent in his buoyant, finger-stretching Recorder Concertos, and Francesco Mancinis Recorder Concertos, whilst technically more forgiving, exploit the full expressive range of the instrument. The technical demands made of the trumpet in Giuseppe Torellis concertos for the instrument are considerable to this day, and there is robust writing for cello in Leonardo Leos set of three Concertos for the instrument.

The technically brilliant and innovative works in this collection embody the character of Italian Baroque; playful and lyrical, with all the character of the operatic works so integral to its usical life. Many of the works in this release paved the way for the Classical styles of Haydn and Mozart, and established forms that would come to dominate European art music for the next 200 years. Listeners can expect to be immersed in the sounds of 17th- and 18th-century Italy, and experience the full spectrum of the regions illustrious musical heritage.