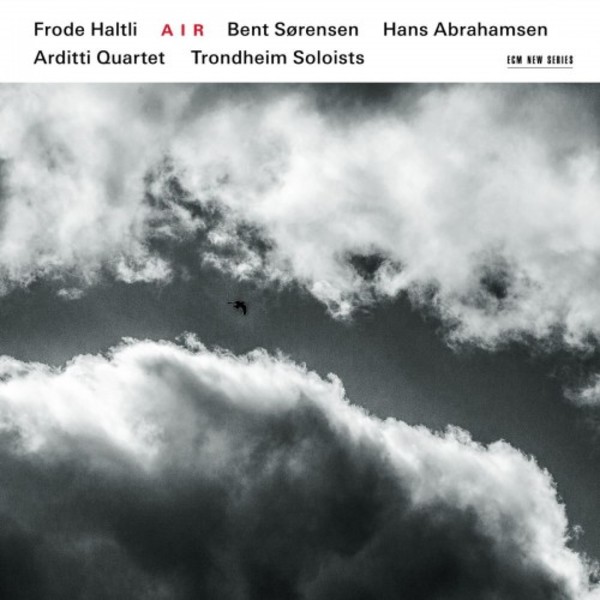 It is Pain Flowing Down Slowly on a White Wall, for accordion & string orchestra
Sigrids Wiegenlied (Sigrid's Lullaby) (version for accordion solo)

It is Pain Flowing Down Slowly on a White Wall, for accordion & string orchestra
Sigrids Wiegenlied (Sigrid's Lullaby) (version for accordion solo)

The innovative Norwegian accordionist Frode Haltli is heard here with chamber orchestra, with string quartet and solo, performing music written for him by the Danish composers Bent Sørensen and Hans Abrahamsen.
Sørensen, he notes, has been an influence on his development as a player, challenging perceptions of what can be achieved on the accordion through tone control and nuances in soft dynamics, a subject explored in detail in It is Pain Flowing Down Softly on a White Wall, where Haltli is heard with the Trondheim Soloists.
Hans Abrahamsens Three Little Nocturnes find the accordionist in the company of the redoubtable Arditti Quartet. For the title composition Air, Hans Abrahamsen returned, at Frode Haltlis suggestion, to the early solo work Canzona, reworking until it became a new piece characterized by a great sense of peace and a cohesive form.

In Abrahamsens solo-accordion Air, song, or rather multiple songs, are in the forefront of the music. Enchanted bundles of melody are separated by halting chordal sequences that eventually peter out inconsequentially, while in the Three Little Nocturnes, the accordion threads its hesitant, fractured lines, sometimes wistful, sometimes manic, through clouds of the Arditti Quartets harmonics, until they finally reach the world of glassy reflections inhabited by so much of Abrahamsens finest music.  Andrew Clements
The Guardian 23 September 2016