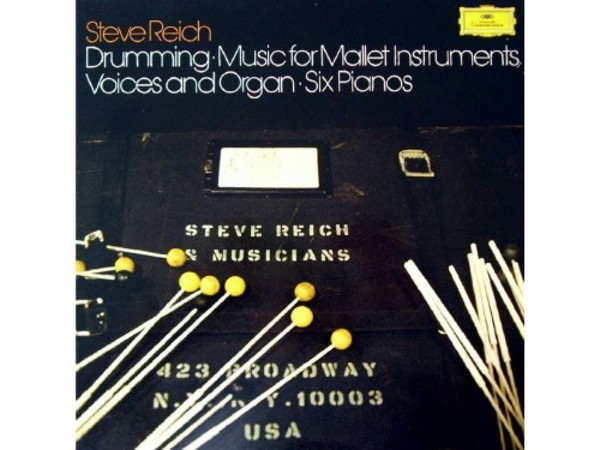 Originally released in 1974 in a 3-LP set, and now re-presented in 180g heavyweight vinyl pressed by Optimal, with new, unique documentation, Drumming was a landmark recording in Steve Reichs early career. This is the first time the recordings are being offered on LP since their original release.

Recorded in the Polydor Studios in Hamburg in January 1974, the set was recognized as a breakthrough in Reichs career. It comprised his longest work to date, Drumming of 1970-71, lasting nearly an hour and a half, and two newer works of 1973, Six Pianos and Music for Mallet Instruments, Voices and Organ.

Theres just a handful of living composers who can legitimately claim to have altered the direction of musical history and Steve Reich is one of them. - The Guardian

Steve Reich is just now emerging from that underground pantheon where he was installed as composer in residence to the young and initiated and now Deutsche Grammophon has produced the album which brings Reich above ground. - The Philadelphia Inquirer (1975)

This three record set is definitely a blockbuster that puts modular music on the map. There is nothing tentative about its production or packaging  Reich has staked out new ground between rhythmic complexity and harmonic richness. - The Soho Weekly News (1975)

What we hear is a busy continuous texture which displays a kind of moiré effect, as tiny alterations in the parts keep inviting the ear to discern new patterns, almost subliminally. It may in short, be the kind of thing that drives you crazy; its also possible to hear quite new and inviting musical possibilities in the technique. - Gramophone (1974)

LP3
Side 1: Six Pianos
Side 2: Music for Mallet Instruments, Voices and Organ