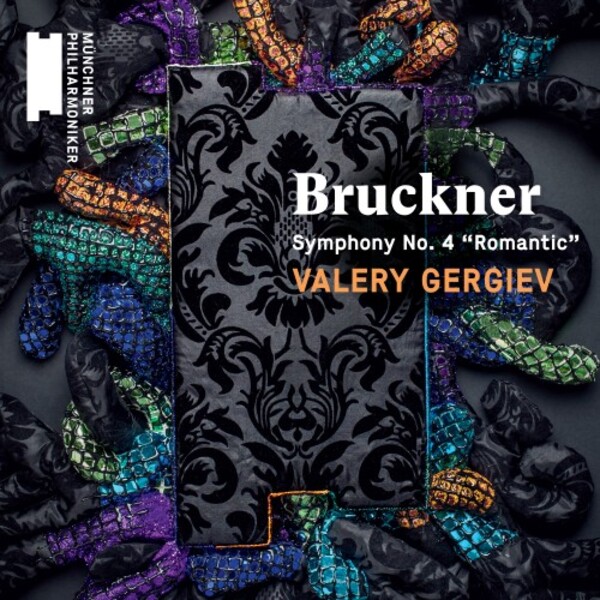 The first releases from the Munich Philharmonics own recording label feature sensational performances of works by two composers with whom the orchestra is synonymous: Gustav Mahlers Symphony No.2 and Anton Bruckners Symphony No.4.
Valery Gergiev and the Munich Philharmonic share an exceptionally close association with the music of Anton Bruckner. The orchestra has made more recordings of Bruckner than any other composer and more recordings of his fourth symphony than any other symphony.
The Fourth Symphony is the only one of his symphonies to which Anton Bruckner assigned a title. By the use of the term Romantic, he was a referring to a medieval world, similar to the settings of many of Wagners operas and depicting nature, forests, and birdsong with chivalrous knights on horseback.
The symphony was recorded during performances marking the inauguration of Valery Gergiev as the orchestras new Music Director. Since first coming to prominence after winning the Karajan Conducting Competition at the age of 24, Gergiev has established himself as one of the worlds great conductors and communicators on the value and role of music in todays society.
Valery Gergiev has held many of the top roles in the world of classical music and is one of the most influential conductors of our time. He is General and Artistic Director of the Mariinsky Theatre in St Petersburg, where is has led a renaissance of this historic institution, firmly re-establishing it as one of the worlds leading opera and ballet companies. From 2006 to 2015 he was Principal Conductor of the London Symphony Orchestra. He has also enjoyed positions and close relationships with the Metropolitan Opera, Vienna Philharmonic, Rotterdam Philharmonic, the Pacific Music Festival and World Orchestra for Peace, whose founder Sir Georg Solti nominated him as his successor as Music Director. However, Gergievs role with the Munich Philharmonic is his first position with a German orchestra.
Gergiev has a peerless reputation in Russian and French repertoire. He has received acclaim around the world, and recordings with Philips, LSO Live and Mariinsky have won countless awards, especially in the music of Tchaikovsky, Shostakovich, Prokofiev, Berlioz and Debussy. However, over recent decades he has become widely regarded as one of the greatest and most exciting conductors of German repertoire in the world today, garnering adulation, especially for his interpretations of Wagner, Strauss, Mahler and Bruckner  music that is at the very heart of the Munich Philharmonics repertoire.
Gergiev understands how to get the best from the Munich Philharmonic, who in turn understand every nuance in Bruckners music  Gergiev has total trust in the orchestras absolute expertise in Bruckners music, that it has developed since it was founded  A truly exciting partnership could develop between this hyperactive conductor and the expectant orchestra - Süddeutsche Zeitung, 24 September 2015
ravishing anthemic pathos  the horn-playing was astonishing, as was the expertise in Bruckner from the whole Munich Philharmonic - Münchner Abendzeitung, 24 September 2015
Gergiev joined the ranks of the Philharmonics great Bruckner tradition - Münchner Merkur, 24 September 2015