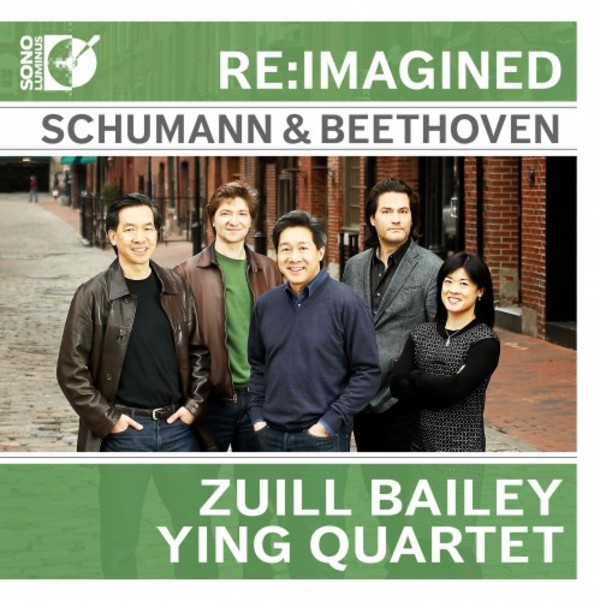 Cello Concerto in A minor, op.129 (arr. for string quintet)

Cello Concerto in A minor, op.129 (arr. for string quintet)

When a string quartet and a cellist have the opportunity to collaborate, it is almost always to play the magnificent Schubert Quintet in C Major. Not surprisingly, as this monumental work would make it into any discussion of chamber musics GOAT  greatest of all time. In fact, the Ying Quartets ongoing collaboration with cellist, Zuill Bailey, has featured many performances of the Schubert Quintet. For this recording project, however, we were eager to explore repertoire for cello quintet beyond the Schubert. In our own, new arrangement of Schumanns wonderful Cello Concerto and an 1832 arrangement of Beethovens well-known masterpiece, the Kreutzer Sonata originally for violin and piano, we consider two celebrated works from their original versions and present them here powerfully reimagined for cello quintet.

Though Schumanns only Cello Concerto is now one of the most beloved of Romantic concerti, it was not always so well received. Schumann was the newly appointed city music director of Düsseldorf when he wrote the Concerto in two weeks between 10 and 24 October 1850. He managed to arrange a couple of read-throughs of the new work, one with the principal cellist of Düsseldorf, Christian Reimers in 1851 and one with the cellist, Robert Bockmüll, but neither occasion led to a scheduled public performance. And only after Schumann approached several publishers did Breitkopf & Härtel finally publish the Concerto in 1854. In fact, the Concertos first public premiere did not occur until cellist Ludwig Ebert performed it with the orchestra Großherzolighen Hofkapelle Oldenburg in June 1860, several years after Schumanns death. It was not until Casals, then later Rostropovich and others, championed this work in the 20th century that it finally gained widespread acclaim.

Beethovens ninth Sonata for violin and piano, nicknamed the Kreutzer, is his most famous. Composed in 1802-3, it can be an intimidating work, not only in terms of length (some forty minutes by most performance versions) but in daunting virtuosic demands. It is also regarded as a dazzling musical and instrumental tour de force, inspiring Tolstoys well-known 1889 novella by the same name, The Kreutzer Sonata, as well as numerous other works for stage and film.

The Kreutzer Sonata made such an immediate impact that it inspired at least two contemporary arrangements, one in 1827 by Beethovens student, Carl Czerny, for piano four-hands, and one published by Simrock in 1832 for string quintetstring quartet plus one additional cello.

The Ying Quartet occupies a position of unique prominence in the classical music world, combining brilliantly communicative performances with a fearlessly imaginative view of chamber music in todays world. Now in its third decade, the Quartet has established itself as an ensemble of the highest musical qualifications in its tours across the United States and abroad. Their performances regularly take place in many of the worlds most important concert halls, from Carnegie Hall to the Sydney Opera House. At the same time, the Quartets belief that concert music can also be a meaningful part of everyday life has also drawn the foursome to perform in settings as diverse as the workplace, schools, juvenile prisons, and the White House.

Widely considered one of the premiere cellists in the world, Zuill Bailey is a distinguished soloist, recitalist, chamber musician, Artistic Director and teacher. His rare combination of celebrated artistry, technical wizardry and engaging personality has secured his place as one of the most sought after and active cellists today.