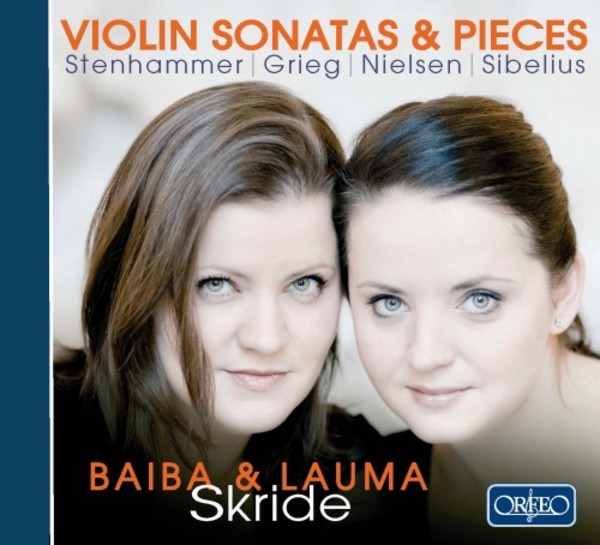 Violin Sonata in A minor, op.19

Violin Sonata in A minor, op.19

On their new CD the Latvian Skride sisters present yet more composers from their extended Baltic homeland region (allowing that they include Norwegian Edvard Grieg, especially since he composed his Sonata in Copenhagen, then called Christiania). The uniting thread of the works on this CD lies in finding ones own sound, something which each of the featured composers first had to find, and an element that the sisters effortlessly achieve as performers. All four composers on this recording share a close link with the violin, and all four had an ambivalent relationship with the German tradition.

Griegs Sonata introduces folk music influences into the expanded Romantic form in a completely new manner: not just as a quote or tone, but as an integral compositional element on all levels, from the dramatically erupting, cadenza-like violin solo through to the internal motivic work.

In addition to the six string quartets that Wilhelm Stenhammar penned, he left this Violin Sonata in A minor, op.19, of 1899 to posterity. While still paying tribute to the German tradition, the Sonata invokes his own mysterious semi-frankness towards the future, which makes considerable demands upon the violin.

Jean Sibelius and Carl Nielsen played and composed a great deal of chamber music. While Nielsens works for solo violin centre on three mature sonatas with piano accompaniment, Sibelius wrote a large number of short pieces for violin and piano, often combined into groups of works, such as the four brought together here as Op.78. They represent the greatest conceivable contrast to his seven famous, large-scale symphonies. In the smaller scale form, the often erratic symphonist reveals himself as an utterly different, yet no less able composer.

In contrast, the Violin Sonata No.2, op.35, of 1912 by the Danish individualist Carl Nielsen offers the most modern music. In a manner typical of the composer, Nielsen eschews the foundations of clearly traditional harmony and consciously experiments with shimmering tonality that naturally opens up opportunities for creating his own new tonal landscape. At the same time, the composer proves to be entirely and sensitively in tune with the times with regard to his approach to historical and musical gestures and formal concepts.

I've never heard the opening of Grieg's Second Sonata sound so gorgeously, openly melancholic, but the way it eases into the smiling folk-infected allegro that follows is wonderfully natural. ... Stenhammar's relatively early Violin Sonata combines romantic ardour and lyrical generosity with playfulness in a manner not quite like anyone else. ... even here the sisters are very much a duo, and that finely-honed teamwork comes to the fore in the Nielsen. For me, this was the first time this strange, complex piece really made sense.  Stephen Johnson (Chamber Choice)
BBC Music Magazine December 2016

There will be something new and intriguing for most chamber-music fans in this recital by Latvian violinist Baiba Skride and her pianist sister Lauma, which brings together relatively little-known violin pieces by the leading Nordic composers of the early 20th century. ... The sisters are ideally matched, too, in four miniatures, Op 78, which find Sibelius in effortlessly lyrical mode, plus Griegs folk-inspired 1867 Sonata No 2 and the long, wistful lines of Stenhammars Sonata from 1900. Why are these works not played more often?  Erica Jeal
The Guardian 16 September 2016