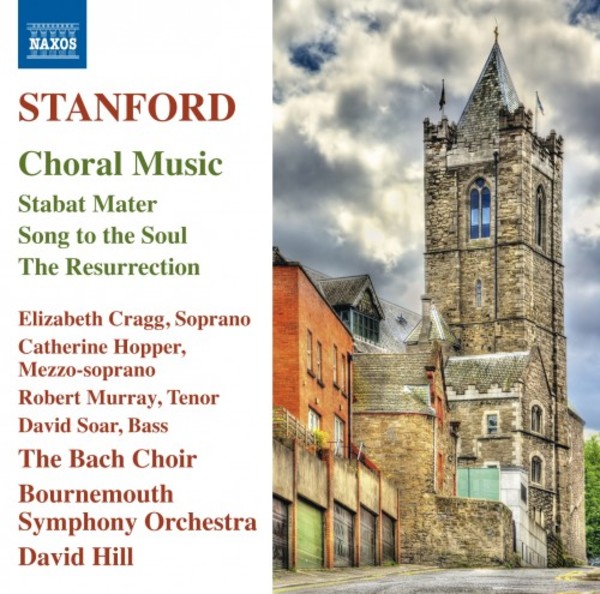 Stanford - Stabat Mater, Song to the Soul, The Resurrection

Song to the Soul, op.97b
Stabat Mater, op.96
The Resurrection

Song to the Soul, op.97b
Stabat Mater, op.96
The Resurrection

Choral music was central to Charles Villiers Stanfords life as a composer. Balancing solemnity with rapturous affirmation, The Resurrection was his first major choral work, written while he was studying under Carl Reinecke in Leipzig and anticipating Mahlers use of Klopstocks eponymous poem in his Resurrection Symphony. The dramatic, at times almost operatic and Wagnerian Stabat Mater is a cantata with two purely orchestral movements suggestive of a large-scale symphony, while Song to the Soul contains some of Stanfords most exhilarating utterances, though it was never performed in his lifetime.

Directed by David Hill, The Bach Choir is recognised as one of the worlds leading choruses, building upon a tradition that combines musical excellence with creativity and innovation. Described by the London Evening Standard as probably the finest independent choir in the world, the choir values its independence, choosing to work with the very best orchestras and soloists. With a strong commitment to new music, The Bach Choir has commissioned works from some of the worlds leading composers, including Sir John Tavener, Bob Chilcott and Jonathan Dove.

Bravo to David Hill, the Bach Choir and the Bournemouth Symphony Orchestra for bringing three neglected large-scale works by Charles Villiers Stanford to wider attention in this excellent recording. The operatic Stabat Mater is Wagnerian in ambition, and with two purely orchestral movements feels something like a choral symphony. The impressive Song to the Soul, unpublished until Stanford authority Jeremy Dibble produced a performing score two years ago, makes a fine companion to the composers first major choral work, The Resurrection  Stephen Pritchard
The Observer 2 October 2016