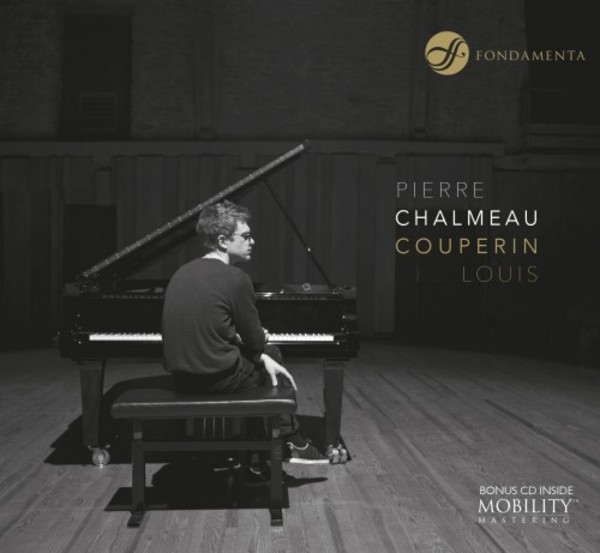 Pierre Chalmeau goes off the beaten tracks as he gives us to rediscover Louis Couperin, unjustly unrecognized by the general public. This first piano work devoted to Françoiss uncle opens our ears on a moving, a staggering music. Here, the transition from the harpsichord to the piano is of blinding obviousness.
Louis Couperin is considered a key figure of genius and the founder of the French school of harpsichord. His Pièces de clavecin - about 130 préludes, sarabandes, chaconnes and other dances - constitute the gem of 17th-century French music.
The profound melancholy of Louis Couperins chaconnes immediately captivated Pierre Chalmeau and gave him the conviction that Françoiss illustrious ancestor deserved to be heard on the piano too like so many other baroque composers. For the last few years, he worked on making his this expressive world, and was thus encouraged by his teachers Tatiana Zelikman, Franck Krawczyk and Thierry Rosbach. As a musician, he had to make do with all the challenges that come with Louis Couperins music: handling the unmeasured Préludes, ornamenting the dances, arranging the pieces together to form suites...
The result of this work couldnt be anything but personal : Three suites of dances assembled n cycles after Les Pièces de Clavecin. Suite du Tombeau (Suite of the Tomb), Suite dElias (Elias Suite) and Suite de la Pavane (Suite of the Pavane). These three cycles of pieces, freely arranged by Pierre Chalmeau, are three musical paths through the core of Louis Couperins world, aimed at making you discover - or rediscover - one of the great masterpieces of harpsichord playing.
Pierre Chalmeau studied at the Conservatoire National Supérieur de Musique et Danse de Lyon with Edson Elias. He graduated in 2008 with best distinction and then furthered his studies at the Conservatoire Royal in Brussels under Aleksandar Madzar. During his master classes and academies, he has benefitted from the teaching of Jean-Claude Pennetier. He is currently furthering his studies with Thierry Rosbach and receives regular guidance from Tatiana Zelikman.
Track listing:
Suite du Tombeau (2235)
1. Prélude
2. Sarabande
3. Sarabande en canon
4. Courante
5. Branle de Basque
6. Canaries
7. Gigue
8. Tombeau de Monsieur de Blancrocher
9. Sarabande
10. Chaconne
Suite dElias (2041)
11. Prélude
12. Sarabande
13. Courante
14. Gigue
15. Sarabande
16. Volte
17. Chaconne
18. Chaconne ou Passacaille
Suite de la Pavane (2356)
19. Prélude
20. Sarabande
21. Sarabande
22. Piémontoise
23. Pavane
24. Prélude
25. Passacaille