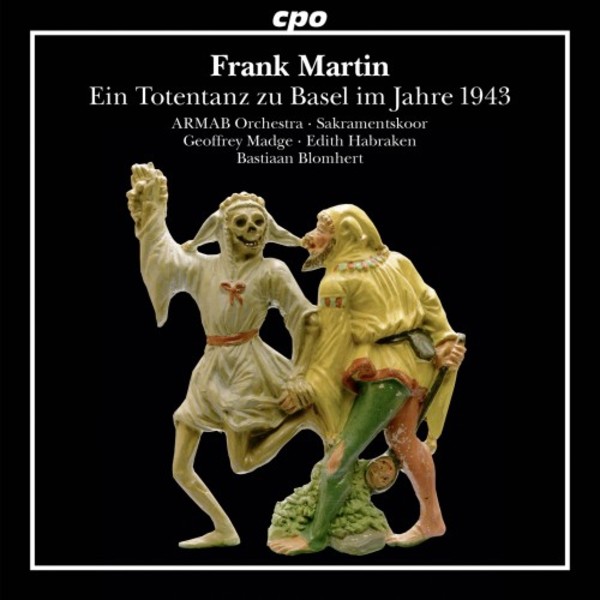 Frank Martin was one of the most eminent Swiss composers of his time, and today its his vocal compositions that rank him among the remarkable composers of the twentieth century.

Many texts describing dances of death began being written during the middle years of the fourteenth century. Painters and engravers like Hans Holbein and Albrecht Dürer depicted this subject. Perhaps the most famous pictorial representation of these danses macabres was produced in Basle - thirty-seven pictures painted on the cemetery walls of the local Dominican Monastery. In 1943 the pantomime Mariette von Meyenburg asked her uncle Frank Martin to compose the music for a stage performance that would feature the traditional, empathetic, and understanding figure of Death, thereby deliberately opposing the horrors and mass slaughter of World War II.

Frank Martin developed a scenario for a professional dancer who would portray Death and for a dozen pantomimes. The action consists of eight scenes in which Death meets with individuals whose time is over. They are portrayed by the members of boys choir and accompanied by a small orchestra. Martin has a large jazz band play the music of the dances of death  the so-called musique profane. Despite critically acclaimed performances, the music was never published. Maria Martin, the composers widow, suggested that a concert suite be developed on the basis of the Danse Macabre in Basle, 1943 to save the music from oblivion. However, this strategy would not have kept the complete version  a genuine masterpiece  from suffering the very same fate. Therefore, this new release from CPO is the complete original version.

The score partly comes from Martins earlier works and makes prominent use of a 16th-century soldiers hymn. Brittle marches and uptempo chorales are interspersed with choral numbers; there are echoes of Stravinsky (The Soldiers Tale) and Kurt Weill, even Gershwin. Its a curiosity, really, but the musics pervasive melancholy is oddly touching in this first-ever recording, which seems to have been prepared meticulously by Bastiaan Blomhert.  Andrew Clements
The Guardian 6 October 2016