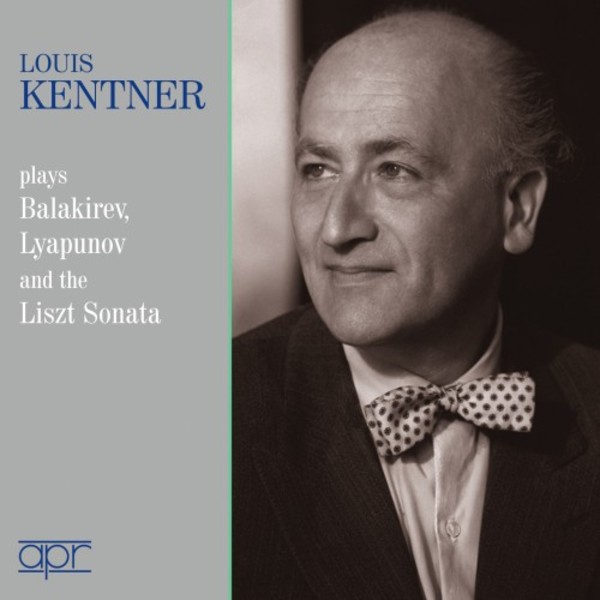 Islamey
Mazurka no.6 in A flat major
Piano Sonata no.2 in B flat minor, op.102
Reverie in F major

Islamey
Mazurka no.6 in A flat major
Piano Sonata no.2 in B flat minor, op.102
Reverie in F major

Though born in what was then the Austro-Hungarian Empire and having studied and launched his career in Budapest, Louis Kentner decided to relocate to London in the 1930s and for the next 50 years remained a part of the British musical establishment. He was a mainstay of the Columbia catalogue throughout the 1930s and 40s where he recorded a wide range of repertoire including the Hammerklavier sonata and many premiere recordings of major Liszt works. APR has already devoted two CDs to the latter (APR5514 & APR5614). In the 1950s he went on to record for HMV, both as soloist and as duo partner to Menuhin, whose brother-in-law he had become through marriage.

Almost all the recordings on this set date from the end of the 78rpm era and have been unjustly neglected as a result. Two major works of the late romantic Russian repertoire, the Balakirev Sonata and the Lyapunov Transcendental Studies, here received their premiere recordings, and to many listeners, they have yet to be surpassed. Kentner had an invincible Lisztian technique; there was no one better to tackle Lyapunovs homage to Liszts own Transcendentals. He was also able to take complete command of that other virtuoso warhorse  Islamey.

Of particular interest is Kentners only recording of the Liszt Sonata, and a magnificent one it turns out to be. Issued on 78s in 1951 when most other labels had switched to LP, this recording had a very short life and has never previously been reissued. It is a major addition to the available discography of Liszt sonatas and to Kentners legacy.