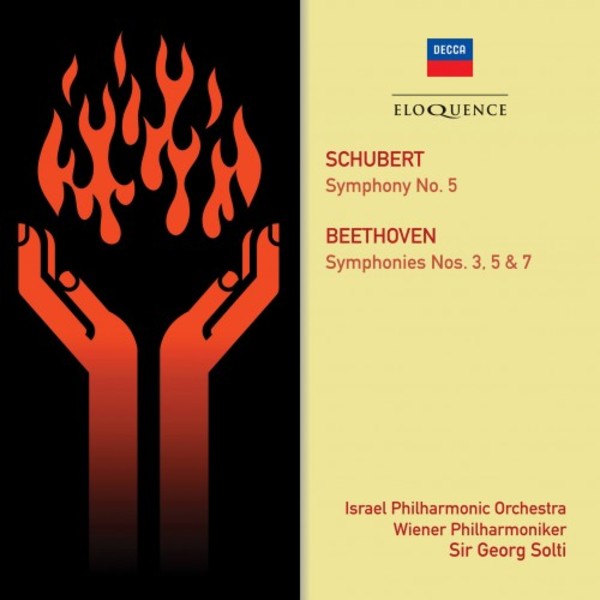 Erich Kleiber was one of Georg Soltis idols and it was a Kleiber performance of Beethovens Fifth Symphony that was, by his own admission, the catalyst in his decision to become a conductor  a decision he made at the age of fourteen. The Schubert recording comes from one of only two recording sessions with the Israel Philharmonic  in May 1958. It is genial, but not without the Solti trademark of excitement.

Solti recorded two complete Beethoven symphony cycles, both with the Chicago Symphony Orchestra, in both analogue (1974) and digital (198690) formats. With the Vienna Philharmonic in 19589 he recorded the Third, Fifth and Seventh symphonies. (He also made a live recording of the Fifth with this orchestra in 1990.) Over several decades he worked extensively with the Viennese players, and despite making several legendary recordings with them openly admitted that it was seldom a harmonious relationship, especially in those early years: They hated me. For many years I used to say that my favourite street in Vienna was the road to the airport.

This reissue continues Eloquences tribute to Sir Georg Solti with, in the main, reissues of his earlier Decca recordings.

masterly from a technical point of view, and in the main very impressive interpretations. They are of the big, heavy, powerful kind, though usually with plenty of drive where its required. - (Beethoven) Gramophone, December 1959

There is a lot of beautiful playing [] What I like best about this disc is the marvellous sound - (Schubert) Gramnophone, May 1959