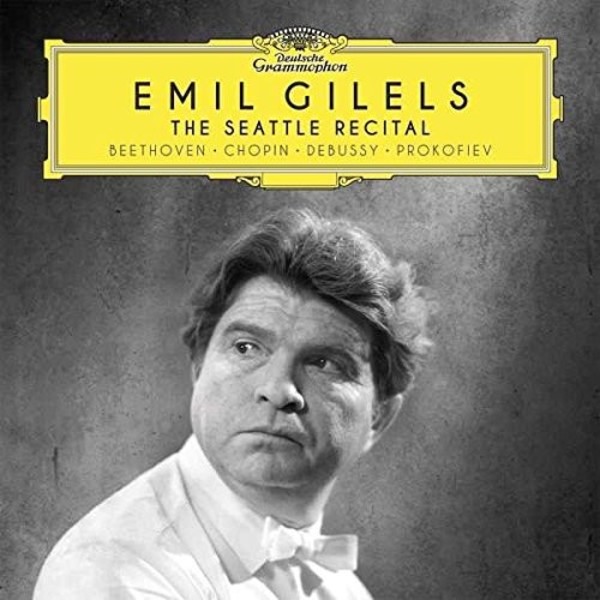 Prelude in B minor (after BWV855a, arr. Siloti)

Prelude in B minor (after BWV855a, arr. Siloti)

On 6 December 1964 the great Emil Gilels gave a tempestuously acclaimed recital at the Seattle Opera. The concert was recorded live for private purposes but with professional equipment. With the exception of a single work, this recital has never before been made available to the general public and is now being released for the first time!

Between 1955 and 1983 Emil Gilels toured North America twelve times. Unlike his Soviet colleague and rival Sviatoslav Richter, Gilels loved the US. I first came here 22 years ago, he said in 1977. I lost here in the United States very much of my heart. You know, I left here a good portion of my life. This certainly held true for his fifth tour, an arduous three months of recitals, concerto dates and recording sessions that began and ended on the East Coast. In between came four West Coast appearances  in Los Angeles, San Francisco and Portland, as well as the present recital recorded in the Seattle Opera House on December 6, 1964 and released here for the first time.

As the concert unfolds, the give-and-take between the pianists inspiration and the publics appreciation is palpable, boding well for future Seattle appearances. But it was not to be; Gilels would only return once more to the city, in 1979: yet another reason to treasure this previously unpublished document of one of the 20th centurys greatest pianists in a live concert  his preferred setting  and at the height of his powers.

October 2016 marks the centenary of the birth of Emil Gilels, lion of the keyboard and, together with his almost exact contemporary Sviatoslav Richter, the dominant figure in post-war Soviet piano playing. Like Richter, Gilels was a native of the Ukraine, and a performer of immense musical power and integrity. Unlike Richter, he took happily to tours in the United States, and to celebrate his centenary Deutsche Grammophon has secured from the Emil Gilels Foundation the rights to a hitherto largely unissued account of a live recital given at the Seattle Opera House on 6 December 1964. In many ways, this was a typical Gilels recital, featuring some big works, and pianism of technical brilliance and muscular tone.

Sadly, too much of the Chopin G minor Ballade that featured in the concert's first half is missing to permit its issue. The upside of this is that the remainder of the recital fits onto one generously filled disc. Made for private purposes but on professional equipment, the mono recording places the listener further away from the instrument than would a studio recording, but the ear soon adjusts, and the reward is a veritable feast of great piano playing.

The account of Beethoven's 'Waldstein' Sonata that opens proceedings is classic Gilels: big-boned, heroic yet alert, and constantly at one with the Beethovenian spirit: has there ever been a greater performer of this work? The performance of Chopin's Variations on Mozart's 'La ci darem la mano' (the only item to have previously been issued) that follows is in no way overshadowed, however, with Gilels wrenching the work away from the effete salon atmosphere and into bright delight.

The recital's second half immediately plunges the listener into Prokofiev's Third Sonata, an electrifyingly energetic performance that leaves us in no doubt as to why the composer entrusted Gilels with the premiere his Eighth Sonata. Much of this energy then transfers to a viscerally exciting account of Debussy's Images, Book I. How glorious it is to hear this music played with such full-toned exuberance, yet with enough nuance to nevertheless bring out the subtle shading of the score. This is a performance that commands attention throughout, tenacious and rhythmically taut, yet at the same time beautifully wrought and supple. The concluding 'Mouvement' really sparkles here, a highlight of the concert as a whole.

More Prokofiev follows with a selection of half-a-dozen of the Visions fugitives. Gilels's way with the composer is far removed from the usual superficial tongue-in-cheek approach, approaching these miniatures as jewels of real stature, as burnished as the greatest of Beethoven's Bagatelles. Similarly the performance of Ravel's Alborada del gracioso that concludes the official programme is full-blooded and substantial while remaining rooted in the world of dance. No mere virtuoso showpiece, this, but a powerful masterpiece underpinned by rock-solid bass lines and a noble tenor register.

The appreciative Seattle audience is rewarded with a blistering, coruscating account of the 'Danse russe' from Stravinsky's Petrushka that brings out all the late-Romantic richness of the score; Gilels's voicing here is positively orchestral in its command of tonal depth. And the recital ends with a tender rendition of a Gilels favourite: Alexander Siloti's arrangement of Bach's B minor Prelude, BWV 855a. It neatly wraps up what must have been a terrific live experience, and so much of that visceral thrill is caught here that, even if you are normally wary of live events caught in acceptable rather than demonstration quality sound, we urge you to try this remarkable disc. It will repay repeated listening for many years to come, and DG are to be applauded for its release, handsomely presented as befits the occasion.

The programme is a typical cross-section of Gilels vast repertoire, moving from Beethovens Waldstein Sonata, Op 53, to Ravels Alborada del Gracioso via Chopin, Prokofiev and Debussy, with party pieces by Stravinsky and Bach (in a Siloti arrangement) added as encores. ... Its with a fiercely concentrated performance of Prokofievs Third Sonata that the intensity begins to rise; after that, the first set of Debussys Images has real backbone and rhythmic focus, and more Prokofiev, a selection of the Visions Fugitives, become searingly vivid snapshots.  Andrew Clements
The Guardian 30 September 2016