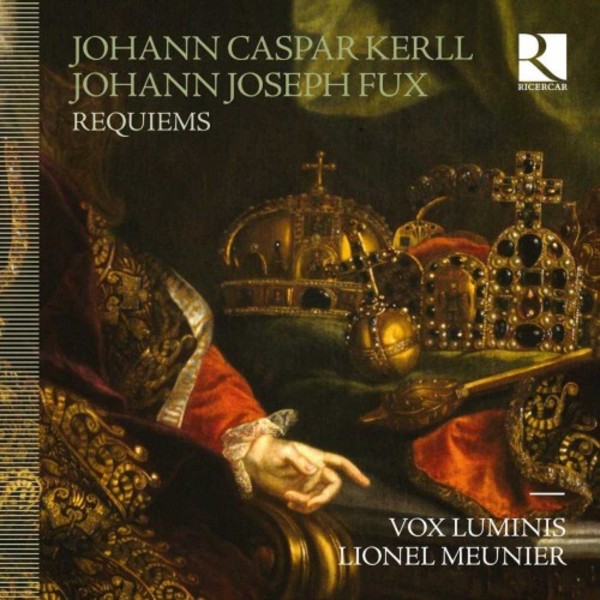 This recording presents two Austrian Requiems of totally different character. Johann Joseph Fux wrote his Requiem in 1720 for the funeral of Eleonora von Neuburg, widow of the Holy Roman Emperor Leopold II. Composed by a musician reputed for his theoretical skill, it impresses with the quality of the polyphonic writing combined with a very rich instrumental fabric comprising cornetts, trombones and bassoon in addition to violins, instruments also benefiting from concertante interventions. This Requiem was played on numerous occasions for official ceremonies, including again for the funeral of Karl VI in 1740.

On the other hand, Johann Caspar Kerlls version is presented in a much more intimist way. As he himself stated in the preface to the edition, this Requiem was written for my souls peace. It is scored for an ensemble of five voices backed up by a quartet of viols. In a more archaic style, its intense emotion is doubtless influenced by the music of his Roman master, Giacomo Carissimi.

Vox Luminiss consummate mastery of polyphonic textures, plangent sonorities and contoured phrasing is profoundly beautiful; the five soloists and five additional ripieno singers declaim text with clarity and decorum. An organist and the four-part viol consort LAchéron often double the voices but sometimes play independent concertante parts... the combination of all 15 musicians is solemnly compassionate. ... the refinement of Vox Luminis is never anything less than sublime.  David Vickers
Gramophone November 2016

The excellent vocal ensemble Vox Luminis goes from strength to strength with its deftly inflected, pure, rather un-English singing. This pair of requiems lies distantly behind Mozarts unfinished classic, since both composers held posts at St Stephens, Vienna.  Nicholas Kenyon
The Observer 21 August 2016