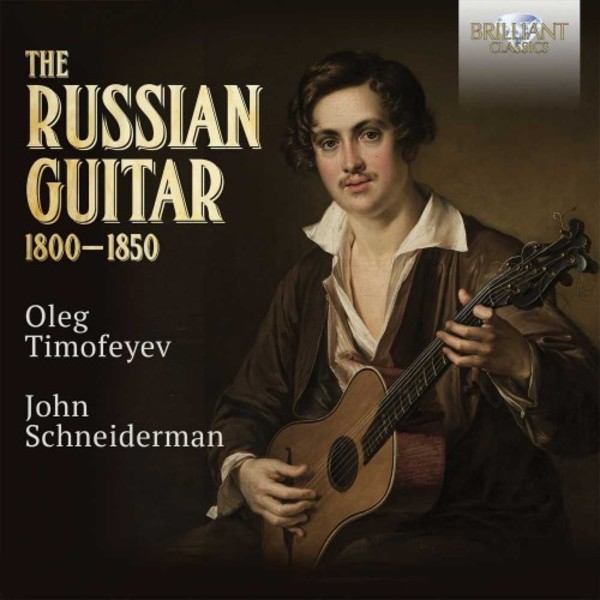 This comprehensive release is a celebration of the astonishing presence of the guitar in Russia at the beginning of the 19th century. Just the sheer number of composers featured on this 7-CD album exemplifies how popular the instrument was. Though many of these composers have now fallen into obscurity, their works live on  discovered by renowned guitarist Oleg Timofeyev, an expert on the music of this time. Mr Timofeyev is known for reviving the seven‐string Russian guitar, and it is on this instrument that he performs these works, many of which have never been recorded before.

The release starts with one of the masters of the instrument, Andrey Sychra, whose numerous pupils form many of the composers on this album. Sychra was an accomplished harpist, and several of his works seem to imitate the delicacy of the harp. His fine Études are among the first for Russian guitar, and this style would be elaborated on by many of Sychras followers, whether they were meant for study or the concert hall. Sychra was also adept at programmatic music, with his compositions after poems able to depict atmospheric scenes, particularly apparent in his works based on Russian folk songs. Other composers, such as Mikhail Vysotsky, preferred to extemporise on themes by well‐known composers; Vysotsky chose Cramers Études as a basis for his free-flowing Fantasia, and even arranged the third contrapunctus from J.S. Bachs Art of Fugue in a remarkably original and novel transcription.

The final CD of this album sees the Russian guitar paired with other instruments  unusual, as Russian guitarists, often in the military or part of land‐owning nobility, rarely had an opportunity to play alongside other musicians. We have Piotr Naimanowskys Variations for guitar and fortepiano, a sympathetic working of the popular French air Que le jour me dure, and a Sonata for violin and guitar by Antoine de LHoyer, a Frenchman who spent 10 years in Russia and frequently wrote for the Russian guitar.

This innovative release represents an exciting chance to discover the severely neglected world of the Russian guitar during this period. As Oleg Timofeyev and his companions show, there is a wealth of music worthy of attention here, in a variety of genres and styles.