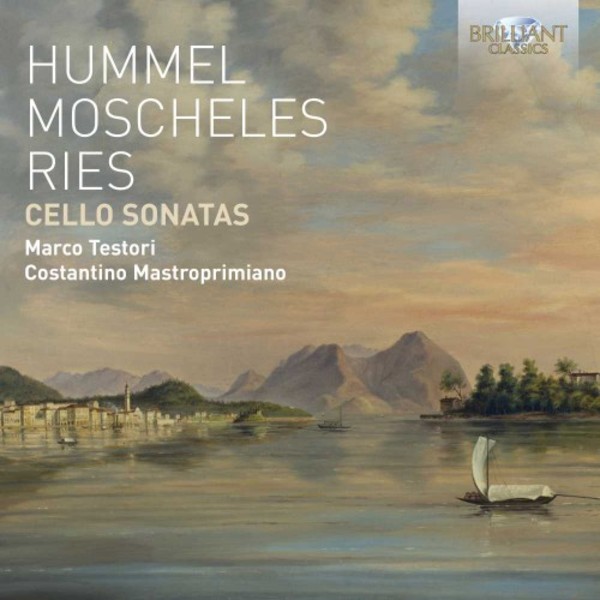 Hummel, Moscheles and Ries are best known for one thing: their relationship to Ludwig van Beethoven, a composer they all personally knew and admired. While their 21st‐century reputations may lie in the shadow of Beethoven, during their lifetimes the three men were recognised and lauded for their own compositional talents. Alongside Beethoven, they formed a link between the end of the Classical and the beginning of the Romantic age, and the works on this release are characteristic of that highly transitional period.

Riess Grande Sonate in G minor Op.125 is an astonishing work of huge breadth, directness and well‐crafted contrapuntal structure. While the singing nature of the cello is brought to the fore in some parts, in others the piano must perform delicately embellished passages of Beethovenian quality (and difficulty). The piano also plays a starring role in Moscheles Grande Sonate Concertante Op.34  unsurprising given that Moscheles was himself a keyboard virtuoso  with the first movement containing extroverted lyrico‐dramatic passages, moving clearly towards the Romantic style. The second movement is lyrical and retrospective, anticipating Mendelssohn in its beauty and delicacy. Hummel, on the other hand, brings the cello and piano together as two partners in a finely tuned conversation in his Grande Sonate in A Op.104, rather than showing off their virtuosic qualities. The narrative quality of this piece leads to a beautiful, private conversation between two well‐balanced protagonists, with some moments of striking melodic charm.

Formerly of ensemble Il Giardino Armonico, cellist Marco Testori has performed in concert halls around the world, including Londons Wigmore Hall and Carnegie Hall in New York. As well as conducting Convivia Musica, a female voices choir, he is Professor of Baroque Cello at Salzburgs Universität Mozarteum. Costantino Mastroprimiano is an accomplished pianist, who has previously discovered and performed transcriptions of music by Hummel, Moscheles, Ries, Czerny and Cramer. As well as being a sought after performer, he is a respected scholar, particularly of Clementi.

Recorded in Italy in November 2015