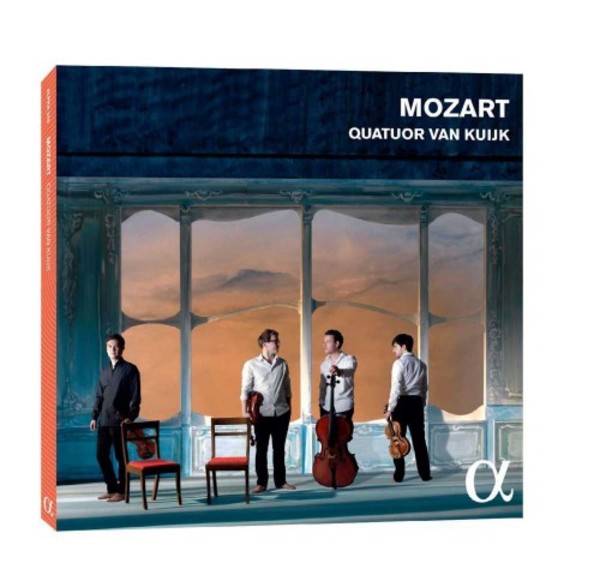 Despite its Dutch-sounding name, the quartet founded by Nicolas Van Kuijk in 2012 is French. But its short career is already international. The Quatuor Van Kuijk won First Prize in the 2015 Wigmore Hall Competition and First Prize and Audience Award at the Trondheim International Chamber Competition, and its members have been named BBC New Generation Artists until 2017. It has also been distinguished by the Academy of the Festival dAix-en- Provence, and it is in the framework of the latters partnership with Alpha Classics that it has recorded this programme. Mozart is obviously the ideal composer to forge a link between chamber music and opera, the raison dêtre of the Aix Festival. This programme combines an impish Divertimento by the youthful Mozart of 1772 with two mature quartets composed around 1782, including the famous Dissonance Quartet with its eminently dramatic opening. Nowhere else in Mozarts quartets do theatre and counterpoint form such a happy pairing. Praised by The Guardian for its style, energy, and a sense of risk, the QVK is one of the most promising chamber groups of the new generation. Alpha is proud to accompany it for several recording projects.

Winners of the Wigmore Halls prestigious string quartet competition last year, the young French ensemble Quatuor Van Kuijk are currently BBC New Generation Artists, so UK audiences can expect to hear a lot more of them. Their debut recording doesnt shy away from well-trodden repertoire, but these three Mozart works come up fresh. Two mature works, K428 and K465, flank the teenage composers sparkling little D major Divertimento, K136. Nicolas Van Kuijks playing is strong and characterful enough to carry the passages where the first violin dominates, but all four players contribute to the extensive colour palette, precise blending and, where apt, the sense of fun that makes these well-judged, serious performances so vivid.  Erica Jeal
The Guardian 2 September 2016