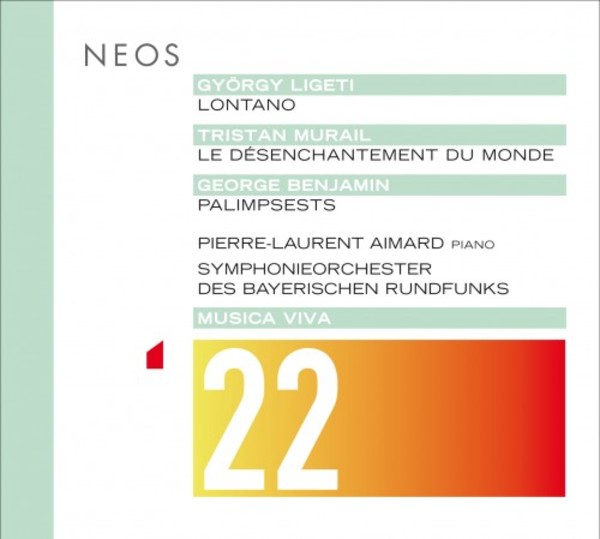 When the first concert of the series founded by the composer Karl Amadeus Hartmann (later designated as musica viva) took place at Munich's Prince Regent's Theatre on 7 October 1945, it marked the birth of an important new cultural event in post-war Germany.

Up to the present day, this oldest concert series for new music still brings together the world's most important artists - conductors and interpreters alike - in the field of new and the newest music, also continuing to set new standards for the interpretation of new classical music with the outstanding Bavarian Radio Symphony Orchestra.

The SACD presented here is a good example of this: Ligeti's Lontano - a classic! Murail's Piano Concerto completed in 2012 - interpreted by Pierre-Laurent Aimard - and Benjamin's Palimpsests of 2002. All three works conducted by George Benjamin himself - one can't do any better than that!

Search for a composer connecting George Benjamin to Tristan Murail, and look no further than Olivier Messiaen, who taught the two of them. But on this very fine recording of major works by both, taken live from the Herkulessaal in 2012 and without much bronchial interference, György Ligeti is the reference, the context of choice. His Lontano (1967) acts as overture. Benjamin leads a superlative performance, one surprisingly visceral for a piece about distance... Benjamins own Palimpsests (1998-2002) come off well, too, and again the Bavarians playing is special... The titles of Lontano and Palimpsests point to something in the music; if the same is true of Murails Le désenchantement du monde (2011/12), a reference to Max Weber, it escapes me. In this concerto symphonique for piano, Murail turns away from explicit spectralism, though the alternately placid and volcanic result still dwells on the nature and properties of sound. Pierre-Laurent Aimard is as strong an advocate as always, and Murail devotees should not hesitate, but the Ligeti and Benjamin are the thing here.
Gramophone November 2016

This disc is from a programme that George Benjamin conducted for Musica Viva in 2012, which had the world premiere of Tristan Murails work for piano and orchestra, Le Désenchantement du Monde, as its centrepiece. ... The concertos interweaving of the orchestra with the piano lines  a solo part conceived for Pierre-Laurent Aimard  is often very beautiful, but then its a real treat to hear the Bavarian Radio Symphony, one of Europes great orchestras, playing all the music on this recording. Benjamins performance of Ligetis Lontano, a 20th-century classic, is exceptional for its transparency and its wonderfully controlled sense of mystery, as if the real key to the music is always just out of reach.  Andrew Clements
The Guardian 9 September 2016