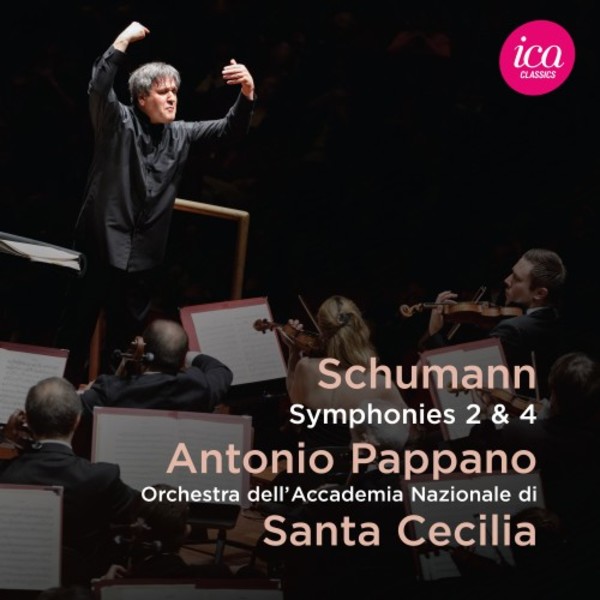 ICA Classics is proud to present the first recordings of Antonio Pappano conducting two of Schumanns most popular symphonies, No.2 in C major op.61 and No.4 in D minor op.120. Symphony No.2 was sketched out in 1845 but its completion was greatly prolonged by nervous exhaustion which some years later was to decline into mental instability. This personal struggle evokes Beethoven, while the tremendous energy in the work recalls Schubert. Symphony No.4 was composed in 1841 but revised in 1851 (the version heard here) and consists of four continuous movements, an innovation at the time.

Pappano conducts his Orchestra dellAccademia Nazionale di Santa Cecilia with his customary energy while bringing out the beauty of the orchestras strings and poignancy of the woodwinds. Delicacy and care over detail as well as bringing out the light and shade of each work are all hallmarks of Pappanos commanding interpretations.

Antonio Pappano, who studied piano and conducting, first attracted the attention of Daniel Barenboim, becoming his assistant at the Bayreuth Festival. After working in Barcelona and Frankfurt, he made his debut at Den Norske Opera in Oslo in 1987, becoming music director there in 1990. From 1992 to 2002 Pappano was music director of La Monnaie, the Belgian Royal Opera House. In 2002, he was named music director of the Royal Opera House, Covent Garden, London, his current contract there running to 2017. Pappano has also been principal guest conductor of the Israel Philharmonic Orchestra and in 2005 became music director of the Orchestra dellAccademia Nazionale di Santa Cecilia. Pappano was knighted in 2012 and was also made a Knight Grand Cross of Italys Order of Merit.