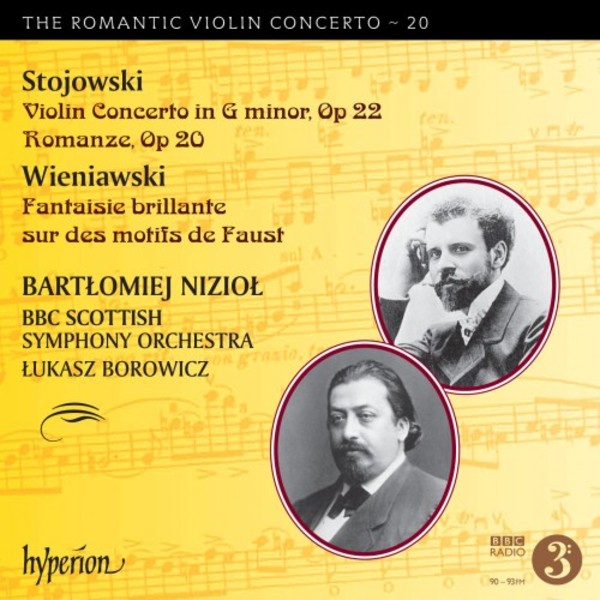 The music of Zygmunt Stojowski has yet to benefit from the renaissance enjoyed by other Polish composers of the late nineteenth and early twentieth centuries. His Violin Concerto  enthusiastically received at its premiere  is here revivified alongside Wieniawskis dazzling Fantaisie in volume 20 of our Romantic Violin Concerto series.

A sister to Hyperions hugely successful Romantic Piano Concerto series, the Romantic Violin Concerto  reaches volume 20 with a sparkling new release of music by two Polish composers, one very well-known, the other much less so. It is the music of the latter that takes the lions share here: Zygmunt Stojowski was born in 1869 in southern Poland (then a part of the Russian Partition), but studied in Paris and spent his last four decades as a teacher of piano in New York, where he died on 5 November 1946.

Though Stojowskis life advanced well into the twentieth century, his music was resolutely Romantic in outlook. The two works recorded here  the Violin Concerto, op.22, and the Romanze, op.20, were composed around 1900, but there is no hint of fin de siècle challenges to established Romantic norms. Stojowski had been strongly influenced by the views of violinist and composer Władysław Górski, who advocated catholicity of taste, and he clearly took this to heart. There are many echoes of Bruch and Mendelssohn in this music, even Dvořák, yet it has its own distinctive profile too. And Stojowski, himself a pianist, nevertheless clearly knew how to write effectively for the violin, as is abundantly clear in these dazzling performances by Bartłomiej Nizioł.

Niziołs emotionally involved style of playing suits this music down to the ground, not least in the impassioned outer movements of the Concerto. His tight vibrato ensures that the passion never becomes too wayward, but the Allegro deciso first movement that launches the disc is tremendously involving, with moments of soulful introspection balancing the more full-throttle passages within a rhapsodic-like construction, all of it admirably focused here. The introspection finds a further outlet in the central Andante that is the Concertos heart, with Nizioł coaxing tones of vocal suppleness from his 1727 Guarneri instrument. There is a Slavic earthiness to much of the closing Allegro giocoso, but also some quick-fire passagework to keep the soloist busy, and some alert exchanges with sections of the ever-reliable BBC Scottish Symphony Orchestra. Yet time and again it is the musics emotional qualities that are brought out in this performance, which will certainly win Stojowski new admirers.

Just as impressive is the delightful Romanze, dedicated to Jacques Thibaud, with its languorous outer sections framing a more ardent central episode. Once again, the music fits Niziołs style like a glove, and the tenderness of his performance is matched by the BBC Scottish players under the sensitive direction of Łukasz Borowicz.

It says much for Stojowskis music that it isnt overshadowed by Wieniawskis crowd-pleasing favourite, the Fantaisie brillante on motifs from Gounods Faust. The performers help enormously by not allowing the Fantaisie to peak too early: the opening passages are commendably restrained. Nizioł allows himself more expressiveness in the second main section, based on Valentins Ô sainte médaille, while the following Mephistophelian section is properly rousing, the duet between Faust and Marguerite wonderfully poised, and the pacing of the closing waltz, with its teasing start, is brilliantly judged. Its a thoroughly enjoyable ending to a marvellous disc.

With high production values from the Hyperion team, and typically informative and engaging notes from Nigel Simeone, this release can be unhesitatingly recommended to aficionados of top-quality violin playing. Brawo!