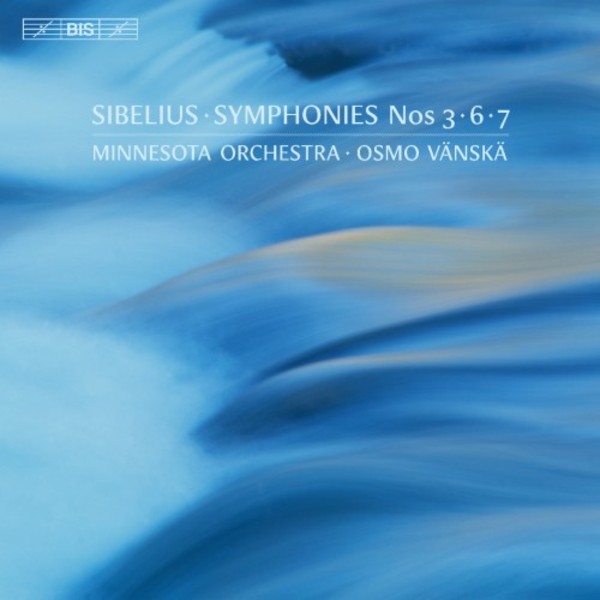 The first disc in the Sibelius cycle from Osmo Vänskä and the Minnesota Orchestra made the reviewer in Gramophone speculate about a benchmark cycle for the 21st century whilst the second instalment received a Grammy for Best Orchestral Performance. The long-awaited final disc in the cycle, with a playing time of 82 minutes, combines the Finnish masters Third Symphony, completed in 1907, with his two final works in the genre, composed more or less in tandem between 1922 and 1924. The Symphony No.3 in C major is Sibeliuss most classical symphony, a radical change in direction after the opulence of its predecessor. It has been claimed that the mastery of form in its first movement is comparable only to the greatest Viennese masters  and at the same time the conductor Koussevitzky, one of the composers strongest champions, spoke of it as music far in advance of its time. Fifteen years later, and after the heroic Fifth Symphony, Sibelius again presented a symphony which surprised those admirers who expected more of the same. Sibelius gave Symphony No.6 a refined modal flavouring, avoiding both virtuoso orchestral writing and massive climaxes, and likened it to an offering of pure spring water. This he followed up immediately with what would become his symphonic swansong  the stern and majestic Seventh Symphony. A one-movement work, it was at first billed as Fantasia sinfonica but it is indeed a true symphony, its single movement portraying elements of all four movements of symphonic practice.

It is almost twenty years since Osmo Vänskä set down his first Sibelius symphony cycle, with the Lahti Symphony Orchestra on BIS. For many collectors it became the benchmark cycle of the age, and the spiritual backbone of the labels monumental Sibelius Edition. With a Finnish conductor and orchestra at the top of their game, it had the imprint of authenticity, and one wondered how it could possibly be surpassed. Yet Vänskäs return to these works with the Minnesota Orchestra, whose reins he took over in 2003, has been just as revelatory, answering those critics who wondered how his readings might benefit from working with a really world-class ensemble. This concluding instalment of Vänskä Mark II is a double cause for celebration, as it marks the completion of a set that looked in jeopardy during the Minnesota bands 201314 lockout. And there is no doubt, listening to this disc, that conductor and orchestra are back on blistering form.

The first thing that strikes the listener is the sheer quality on offer here: not just of playing or musicianship, but of recording, which combines atmosphere aplenty, a vast dynamic range and a quite staggering level of detail. In the classically proportioned Third Symphony theres a degree more urgency than before, a superb lightness of touch, but with imposing weight where called for. The intermezzo-like second movement  so difficult to bring off convincingly  has never sounded more natural in poise, while the tricky fugato-style development in the final movement has a rare cogency which adds enormously to the impact of the following build-up and peroration. This is as fine a Third as youll hear, full of heart.

The Seventh has a similar, overwhelming impact, with textures gloriously rich yet at all times transparent, and the various tempo changes negotiated with tremendous assurance. The scherzo-like Vivacissimo passage that proceeds the great storm passage is remarkably nimble and light, dazzlingly so, yet such virtuosity constantly feels at the service of the unfolding musical argument, never for its own sake. In the closing pages, the intensity of the string playing is incredible, while burnished brass and delicate woodwind shine their light on the scene.

Yet perhaps the greatest achievement of this astonishing disc is in that Cinderella of the cycle, the Sixth Symphony. Enigmatic and elusive, with strong modal hues, it is regarded by many Sibelians as the finest of the seven, and in so many ways it proves the greatest challenge for performers. In music that so doggedly refuses to settle into its groove, it will not do simply to rely on the normal strategies, but Vänskä and his Minnesota players here score their greatest triumph. The care they lavish on the extraordinary, often fragile sonorities is matched at every point by the naturalness with which they allow the music to unfold. As in the Seventh, speeds are broader than in the Lahti cycle, and this is much to the benefit of both works. There is a peaceful inevitability to this Sixth, even to the delightfully sprung rhythms of the Poco vivace third movement, and notwithstanding the bitingly stormy central episode of the finale. In the final bars, there is a hint of spring warmth to the coolness, setting the seal on a truly great traversal of this score, notable above all for its unforced depth.

Vänskä sets new standards with this cycle, and this final disc exceeds expectations, both musically and sonically. A new benchmark for the new millennium, at the same time worthy to stand alongside the very greatest performances of the past. It is a huge achievement, and a stand-out disc by any measure.

Vänskäs Sibelius is all about clarity  of rhythm, of texture, of intention. It is zealously unfussy and entirely without exaggeration. But it can stop you in your tracks. The no-mans-land we enter a few pages into the Third  a moment or two of reflection in a barren landscape  can rarely have sounded more like Sibeliuss pure spring water. But in the suddenness of the hush Vänskä manages to change the way the air moves in Minnesota Hall.  The quietism of the Sixth speaks volumes. If ever a piece existed between the notes, this is it. In the seemingly negligible the considerable is to be found  like the tremulous darkening before the close of the first movement; a major event writ small. And that is especially startling on account of the luminosity surrounding it.  Edward Seckerson
Gramophone September 2016

The playing is polished and detailed, now springy and buoyant, now occluded and chilling. Tempi are slightly broad but convincingly so. From the plunging energy of the opening of the Third Symphony to the bleak, raw ending of the Seventh, this is a gripping listen.  Fiona Maddocks
The Observer 17 July 2016

Beautifully clear recorded sound, in a warm but not over-sumptuous acoustic space, is matched by the orchestras sound under Vänskä  a kind of sharp-focus richness thats never cloying, conjuring instead a sombre inner glow that wonderfully suits the musics idiom.  Malcolm Hayes
BBC Music Magazine August 2016