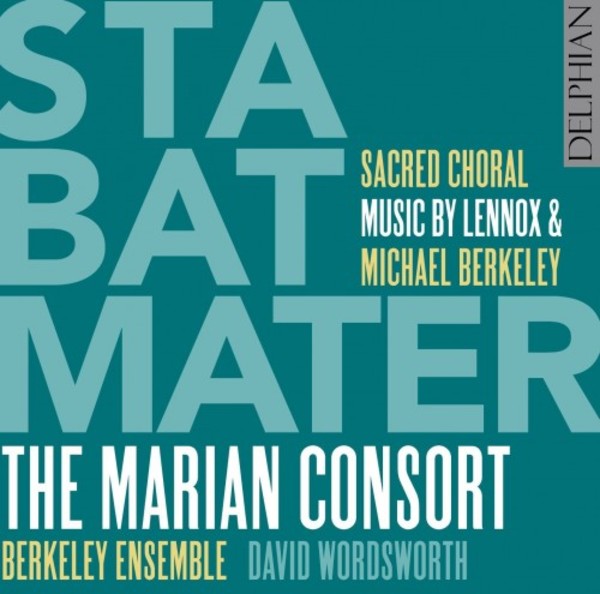 Lennox Berkeleys Stabat Mater derives from one of the most fertile and inspired periods of his compositional life. A masterpiece, and until now the last of his major works to go unrecorded, it was written for a concert tour by his close friend Benjamin Brittens English Opera Group; hence the unusual but effective scoring for six solo voices and twelve instrumentalists. Delphian artists The Marian Consort  with five acclaimed discs of early music to their credit  now show their versatility in a cappella and accompanied music by both Lennox and his son Michael Berkeley. They are partnered in the larger works by the Berkeley Ensemble, whose performances are enriched by their intimate knowledge of these composers music. The same can be said of conductor David Wordsworth, who has known and worked with both composers, and who here realises a long-cherished ambition to direct this important addition to the catalogue.

Theres earnest beauty in [Berkeleys Stabat Mater] and the instrumental playing on this recording is spot on  the Berkeley Ensemble under David Wordsworth clinches the balance of chaste, plaintive and urgent  while the young early-music voices of the Marian Consort sound well-behaved but a bit thin for the more thuddingly gothic moments. Theyre better-suited to the sinewy a-cappella Mass for Five Voices, or to the spindly arabesques of the last piece on the disc, Touch Light, by Lennoxs son Michael.
The Guardian 29 July 2016

Commissioned by Britten as a touring "companion" piece to the first performances of The Rape of Lucretia in 1948, Stabat Mater shows Lennox Berkeley at his most beguilingly austere, with quasi-medieval vocal writing  Rory McCleery's alto solo is outstanding  fastidiously embroidered by chamber ensemble. His a cappella Mass and Judica Me are followed by a beautiful piece for soprano, alto and string quintet, written for a wedding by his son, Michael.  Hugh Canning
The Sunday Times 17 July 2016