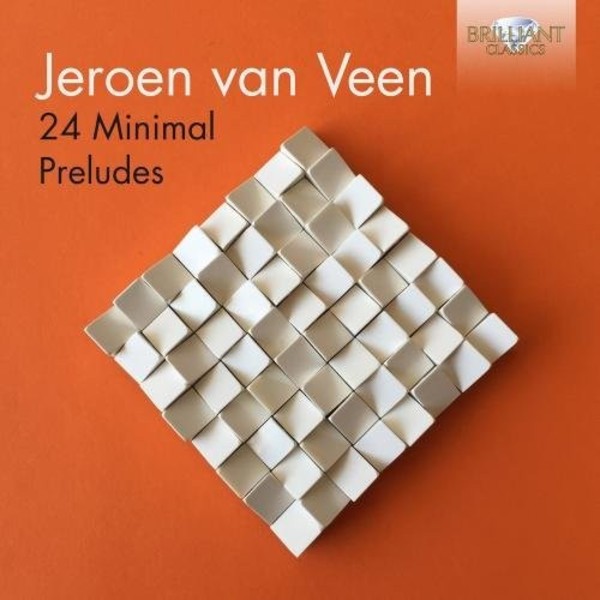 In these 24 Preludes, spread over two books of equal length, Jeroen van Veen has been inspired by the key‐order of Chopin, the piano‐techniques of Franz Liszt and Sergei Rachmaninov, the polyrhythmic textural layering of Philip Glass, the sound of Simeon ten Holt and the rhythms of Steve Reich, all governed by the guiding principle of less is more.

The preludes are highly representative examples of van Veens Lego‐brick aesthetic. The idea behind this is to create variation. Lego refers to the Danish phrase leg godt, which means to play well. Complexity is lent to such simple materials by the layering of irregular and compound time‐signatures such as 5/8, 7/8, 11/8 and 13/8. Many motives reappear in various works, like Lego bricks in Lego structures do. Some Preludes such as No.18 are just a few Lego bricks that can be repeated or even constructed in any order.

Since they were written in 2003‐4, these simple preludes have inspired film‐makers and artists in their own works; they have also provided the score to a ballet. After the success of Jeroen van Veens many recordings of minimal piano music for Brilliant Classics, this new release is sure to receive attention in the press. Most recently he recorded the complete piano works of Erik Satie in time for the 150th anniversary of the composers birth. His previous recording of the Preludes was well‐received by the American Record Guide: Veens own Minimal Piano Preludes, which take up two discs of the collection, are a must‐have his performances are more technically polished and conventionally musical: the music breathes.