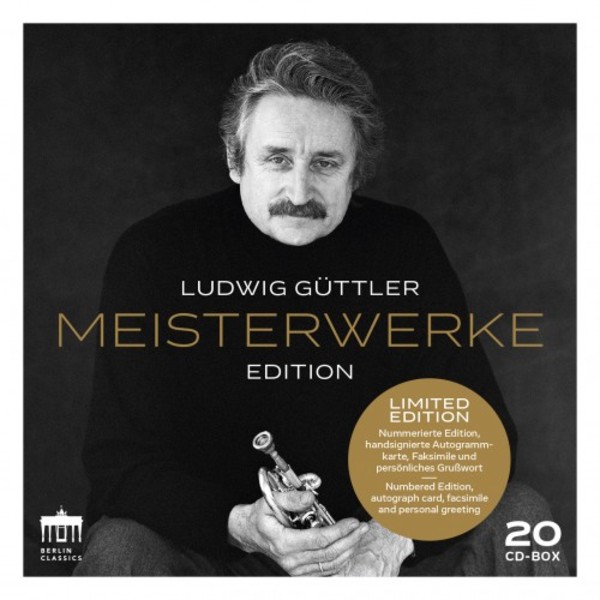 In 1980 an article appeared in Die Zeit newspaper with the following heading: 'A king of the trumpet. Dresdentom Ludwig Güttler knows no boundaries.'

Nine years before the fall of the Berlin Wall, the (then West) German newspaper outlined what the 'Güttler phenomenon' had constituted up until that time. The artist in many ways knows no limits: long before 1989 he had leapt over the German-German border, and looked for and found his audience in the former Federal Republic of (West) Germany. His biography is full of anecdotes about how Güttler had almost single-handedly organised concerts in the West. And even now, his artistic development continues apace. Indeed, the 73-year-old is constantly working on new projects, developing ideas, and giving numerous concerts at sold-out venues. Truly, his is an interest in music that knows no borders!

A master of the trumpet, Güttler is also an enthusiastic performer on the corno da caccia, the rediscovery of which he made relevant. In addition to this he has founded ensembles such as the Virtuosi Saxoniae, as well as conducting. In over forty years, his unique variety of repertoire has only continued to grow. ütler's mastery can be heard in everything from Baroque to Classical to contemporary music, from Schütz to Bach, from Mozart to Hindemith. In an interview about the creation of this series, when asked whether his wealth of repertoire is still manageable, he answered in his own inimitable way, 'Yes, I find it is: clear as I look back, consciously present in my mind now and attractive in my plans for future initiatives. The size of this series of 20 CDs fills me with pride. That said, the edition comprises just a selection of the recordings we have made in the studio and at concerts over the years.'

Only a few musicians with soloistic profile can look back on such a diverse and extensive discography. Yet still his curiosity cannot be stilled. The booklet to this edition includes the statement: 'Without curiosity, no life, no questions!' One could add to this by saying ,... and without curiosity no success in music!'