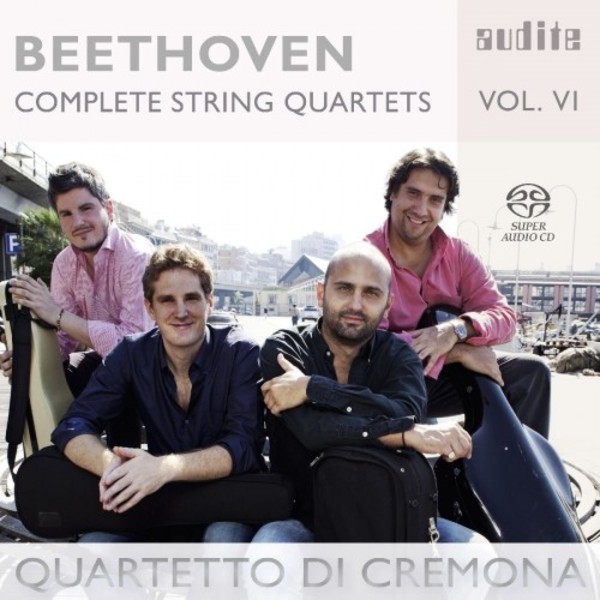 Early and late - with Beethoven this always implies developing questions and expanding compositional ideas. In the case of the works recorded here, the A major Quartet from the Op.18 set and the B flat major Quartet, Op.130, the focus is on folk music and its integration into art music: a recurring, central subject for the composers of 'Viennese Classicism' which also guaranteed general accessibility to their music. The variations on a simple theme in the Andante of the Quartet Op.18 No.5 represent such a case of looking towards popular music, as also does the Alla danza tedesca from the late Quartet Op.130, where the rhythm and character of the good old German dance is alienated to such an extent that it seems to appear as a damaged recollection, more than as an actual dance.

In all other aspects, however, the styles of these two string quartets could not be more different. 'Who would not remember the enthusiasm created by his first symphonies, his sonatas, his quartets,' a contemporary wrote not long after Beethoven's death. 'All music lovers were delighted to find, so soon after Mozart's death, a man emerge who promised to replace the sorely missed. But alas, albeit gradually, though increasingly, he departed from his initial path, insisted on cutting a new one, and finally went astray.' This 'going astray' is today considered the most fascinating late oeuvre in musical history, to be experienced here in passionate and painstaking interpretations by the Quartetto di Cremona as part of their recording of the complete Beethoven Quartets.

There was a time, not so long ago, when Beethoven quartet cycles could be rather hit-and-miss affairs, the early quartets often too heavy-handed, the late ones too technically taxing. In recent years, ensembles have appeared for whom the technical demands pose much less of a problem, and who are stylistically much more aware in the early works. Fine recent cycles have included sets from the Takács and Tokyo Quartets, but among the younger generation one of the strongest ongoing cycles is that of the Quartetto di Cremona on the Audite label. Formed in the year 2000, they are very much millenials: well-informed by the insights of historic performance practice, but now masters enough to create their own path. Trained by members of the Quartetto Italiano and the Alban Berg Quartet, they combine Italianate passion and intensity with Austro-German formal awareness and discipline in ideal measure, and their Beethoven series so far has been full of delights.

They now reach volume 6, coupling the fifth of the Opus 18 Lobkowitz set  the lovely A major Quartet  with one of the greatest of the late quartets, Op.130 in B flat. Its typical of their approach as a whole that the earlier work is by no means overshadowed by the latter: in fact, the two pieces complement one another brilliantly. The Cremona players bring sunlit textures to the A major, marrying Mozartian elegance and Haydnesque wit with hints of Beethovenian subversiveness. They also know when to ease off the vibrato  not too frequently, just enough to allow their instruments to speak for themselves, with a well-rounded tone that still admits of transparency. The off beat accents in the Minuets Trio section are nicely observed, and the performance really shows its quality in a superb account of the third movement Andante cantabile variations, the penultimate variation beautifully poised and inward, the final variation splendidly earthy and forthright (securely underpinned by Giovanni Scagliones Amati cello), before a lovingly nostalgic coda. In the closing Allegro, the sense of eavesdropping on a lively yet intimate conversation is at its strongest.

A decent pause is allowed by the production team before the players embark on the heights of Op.130. This is a marvellously considered reading in which the various parts, so contrasting in tone and duration, are perfectly integrated into the whole. With the original Grosse Fuge finale already presented separately in volume 3 of the series, this performance allows its replacement to take its rightful place immediately after the Cavatina, and the way in which the Cavatina (a gorgeous account, yet never overplayed) leads not just logically but inevitably into the closing Allegro speaks volumes for the groups interpretative maturity. The epic opening movement holds no fears for these players, negotiating the gear changes and dynamic contrasts with utter naturalness, and never pushing too hard. The blink-and-youll-miss-it Presto is expertly done, its quicksilver tone just a shade more robust than usual, the slides before the return of the opening music very vivid. The heartfelt opening gestures of the Andante third movement have never sounded so affecting  pure-toned and aching before the music gets properly underway. Likewise, the subtle swells of the Alla danza tedesca fourth movement, upon which so much of the musics folk character rests, are splendidly and finely judged, eclipsing many more illustrious groups in the process. Beethovens integration of folk styles into his late works is something that too often eludes musicians: hed surely have been delighted to hear this performance, refined but free of any cloying preciousness.

The recorded sound is intimate but never dry, serving the performances faithfully yet unobtrusively. Those who have been following this excellent modern cycle will snap the disc up immediately: for those who havent, this is as fine a place to start as any, and will have you hooked in no time.