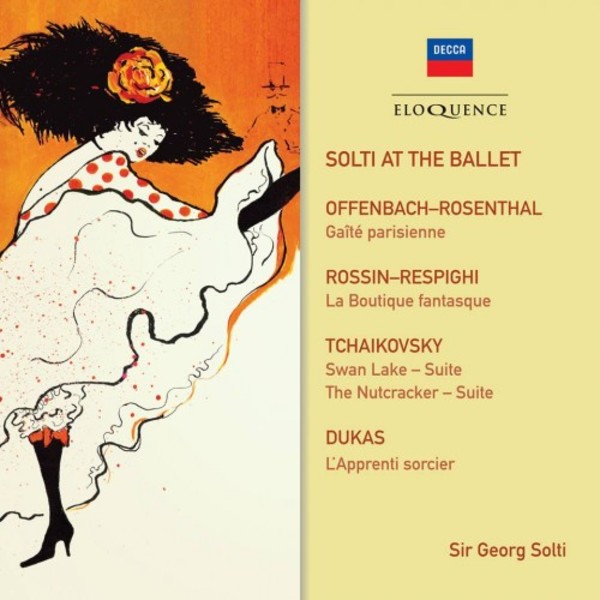 Solti at the Ballet

The Hungarian-born conductor Georg Solti (19121997) was one of Deccas most prolific recording artists. Eloquences survey of his recordings features, in the main, some of his earliest recordings for the company.
Although recorded as far back as 1960, during his tenure with the Royal Opera House, Covent Garden, Soltis recording of Gaîté Parisienne remains one of the sonically most thrilling orchestral recordings ever to be made and a performance that is no less impactful. Both the Rossini/Respighi and the Dukas pieces were recorded with the Israel Philharmonic in the late 1950s at a time when Solti also recorded music by Mozart, Schubert, Mendelssohn and Tchaikovsky with this orchestra. The coupling of the Rossini/Respighi and Dukas works was the first recording Decca was to issue with the Israel Philharmonic (in September 1957).
In 1967, Solti became music director of the Chicago Symphony Orchestra, a post he held until 1991. During his tenure there, his work as a recording artist continued unabated, including complete symphony cycles by Beethoven, Brahms, Mahler, Bruckner and Tchaikovsky. As music director laureate, he continued to record with the Chicago Symphony Orchestra until 1997.
The Covent Garden orchestra is on its toes, and its new conductor gets some exhilarating playing, and the quality is all you could wish for - [Offenbach] Gramophone, November 1961
an absolutely splendid recording ... This Solti performance [of La Boutique fantasque] is sheer delight, played as it is with a combination of style and gusto it needs; a most exhilarating performance ... this is an excellent debut on Decca - [Rossini/Respighi, Dukas] Gramophone, October 1957
The Nutcracker suite brings consistently responsive playing from every department of this fine orchestra, and many touches of affectionate detail from Solti ... The whole performance is relaxed yet characterful and the individual dances emerge as freshly as ever. - Gramophone, May 1987
The Swan Lake suite ... has a winning spontaneity - Gramophone, May 1989