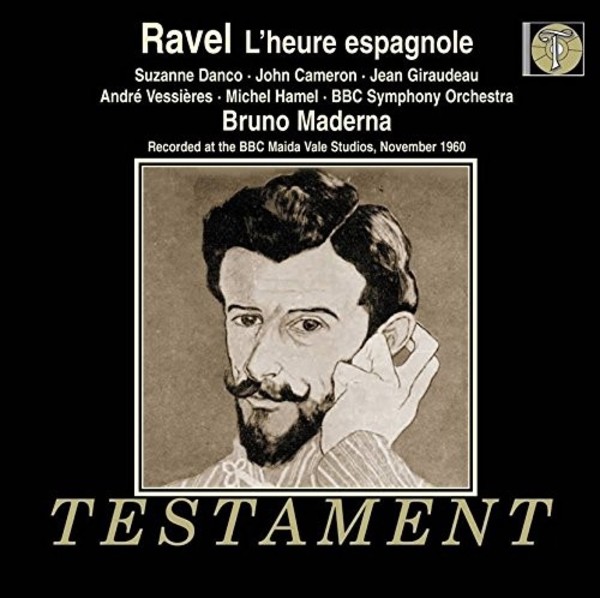 Although the BBC was still recording in mono, the depth of sound and the warmth of this recording do justice to Ravels orchestra. Throughout his conducting career, Maderna demonstrated a particular affinity for Maurice Ravels orchestral works, his flawless style allowing a perfect balance between the sensuality of the writing and the vivacity of the rhythm. He interpreted the score with a composers eye and drew from his orchestra a very French lightness and diversity of sound. For example, he asked the strings to vary the bowing to create a shimmering sound. In the deadpan world of LHeure espagnole, he refrains from overdoing things, conducting with an almost pragmatic approach. Gonzalves repeated habanera is sketched, nothing here is emphasised but everything suggested, faithful to that Ravelian quality of modesty which is even more essential here given the erotic suggestiveness which peppers Franc-Nohains text.
Because although LHeure espagnole is sung, it is first and foremost spoken, something which caused some concern to the little company which bring the work to life so effectively here. In London, Suzanne Danco was reunited with two of her colleagues from Geneva  Michel Hamel as Torquemada and the incomparable Don Inigo Gomez of André Vessières. Jean Giraudeau, the indefatigable tenor of the Radiodiffusion Française, joins them with his hilarious Gonzalve (at Torquemadas return, his dépéchons is irresistibly comical). The polished singing of Michel Hamel made his Torquemada a model of intonation, intention and spirit.
The real surprise of this Heure espagnole beside the Thames is an Australian: John Cameron carries the clocks from the workshop to the bedroom and captures Concepcions heart. This pillar of Covent Garden and Glyndebourne, who Eugene Goossens convinced to come to England in 1949, enjoyed a hugely successful career throughout the 1950s. His burnished baritone, with such a direct sound, mastered the French to perfection. He brought to Ramiro, who is often played as something of a simpleton, a welcome elegance and intelligence. This, along with his controlled style, no doubt earned him, during this now historic session, the admiration of his francophone colleagues.
- Jean-Charles Hoffelé
Recorded at the BBC Maida Vale Studios, 15 November 1960: previously unpublished
Cast:
- Concepcion: Suzanne Danco
- Gonzalve: Jean Giraudeau
- Torquemada: Michel Hamel
- Ramiro: John Cameron
- Don Inigo Gomez: André Vessières