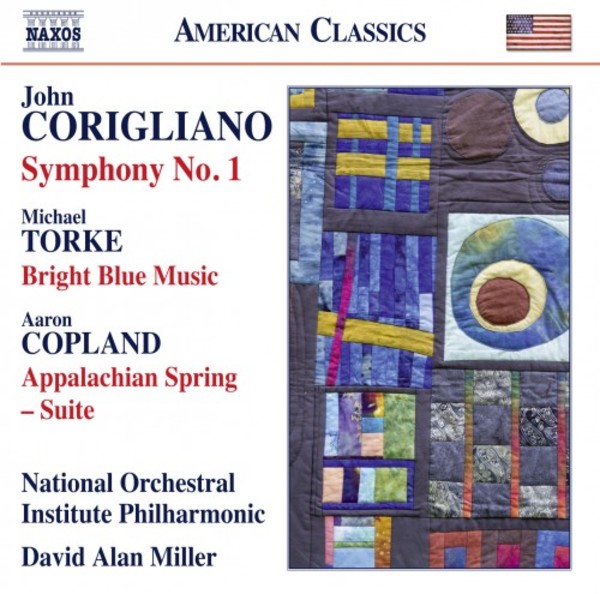 This is the first recording for Naxos by the National Orchestral Institute Philharmonic, which is composed of elite conservatory students from across the United States and abroad. The chosen works reflect the richness and variety of the American repertoire. A work of immense poignancy and power, John Coriglianos Symphony No.1 is a commemoration of friends of the composer who died during the 1980s and 90s. Michael Torkes Bright Blue Music evokes rich lyricism couched in the composers favorite key of D major. The suite from Coplands Appalachian Spring is one of the great, quintessential American works.

David Alan Miller has held the position of music director of the Albany Symphony since 1992. Through exploration of unusual repertoire, educational programming, community outreach and recording initiatives, he has reaffirmed the Albany Symphonys reputation as the nations leading champion of American symphonic music and one of its most innovative orchestras. Accolades include Columbia Universitys Ditson Conductors Award, the 2001 ASCAP Morton Gould Award for Innovative Programming, and, in 1999, ASCAPs first-ever Leonard Bernstein Award for Outstanding Educational Programming. Miller is highly regarded as a champion and interpreter of American music, new and
old. His extensive discography includes a Grammy Award-winning recording of works by John Corigliano, as well as recent recordings of music by John Harbison, Kamran Ince, Aaron J. Kernis, George Tsontakis and Michael Torke.