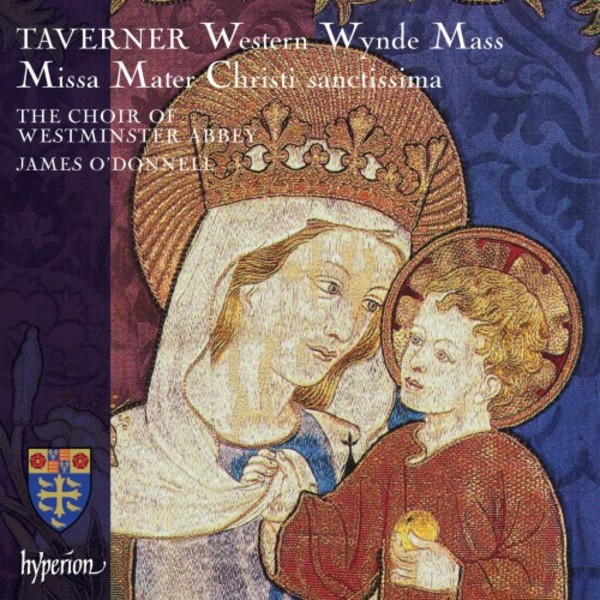 Two of the undisputed choral masterpieces from sixteenth-century England, by one of the greatest English composers: John Taverners Missa Mater Christi sanctissima and Western Wynde Mass. The five hundred years since the works genesis are but as a watch in the night in these sublime performances from Westminster Abbey Choir and James ODonnell.

The latest release from the Choir of Westminster Abbey under James ODonnell is a welcome opportunity to focus not only on the astonishing output of early Tudor composer John Taverner, but also on the Hyperion labels links with two Wesminster-based choral institutions. These are fine times indeed for admirers of Taverners music. In 2015 one of our favourite recordings was his Missa Corona spinea (CDGIM046) from the Tallis Scholars, and more recently there has been a fascinating disc of the Western Wynde Mass and related music from Andrew Parrott with his Taverner Choir & Players on Avie (AV2352). Now the Westminster Abbey Choir pair that same Western Wynde Mass with Taverners less familiar motet-and-mass cycle Mater Christi sanctissima.

The motet was written while the composer was organist and choir master at Cardinal College (now Christ Church), Oxford, in the late 1520s, where  under the watchful eye of Cardinal Wolsey  devotion to Mary the Mother of God was given special attention. This performance has a gentle, lilting quality that is most appealing, the trebles effortlessly soaring up to their higher notes. The Mater Christi Mass survives with one voice-part missing in the only extant source; for this recording Francis Steeles splendid reconstruction is used, and the result is a revelation, combining moments of ecstasy such as the ending of the Gloria with passages of high excitement like the final Dona nobis pacem of the Agnus Dei. Overall, the performance is marked by an engaging ebullience which should win this elusive work many admirers. As with many English masses of the period, the Missa Mater Christi lacks a polyphonic Kyrie, as does the even more compact Western Wynde Mass, based on a popular (and mildly risqué) secular song of the time. Less incisively edgy than Parrotts account with smaller forces, this smoother, more ethereal performance is nevertheless marvellously buoyant, thanks to the lively speeds set by James ODonnell. The average age of boy trebles may be rather lower now than in Taverners time, but it is still thrilling and gloriously transporting to hear his music performed by such forces, and this disc certainly withstands comparison with the finest modern all-adult choirs. Recorded in St Albans Church, Holborn, it is well-focused but warm, the trebles captured perfectly alongside the richly expressive lower voices. Lucid, entertaining notes by Jeremy Summerly further enhance this highly attractive release.

Little more than half a mile away on Londons Victoria Street is another of the capital's great choral establishments: Westminster Cathedral Choir has been a mainstay of the Hyperion catalogue since the days of David Hills directorship in the 1980s. Where the Abbey choir excels in the English repertoire from the Tudor to modern eras, the Catholic Cathedral Choir has long cultivated a brighter, more consciously continental sound, seemingly tailor-made for the Spanish and Italian Renaissance works of Victoria, Palestrina and their contemporaries.

Released a month before the Abbeys Taverner disc, the latest addition to the Cathedral Choirs discography focuses on the Spanish composer Alonso Lobo (1555-1617). Remembered now chiefly for the funeral motet Versa est in luctum composed on the death of Philip II, Lobo was a protégé of Francisco Guerrero, and spent most of his adult career at Seville and Toledo. Six of his Mass settings were published in Madrid in 1602, the two largest for six voices. One of them  the Missa Maria Magdalene  is heard on the latest disc, together with Guerreros Easter-themed motet on which it is based. Alongside these sumptuously-textured works are Lobos even more striking Lamentations for Holy Saturday, with their extravagant settings of Hebrew letters and a gorgeous final invocation, Jerusalem, Jerusalem. Two motets, Regina caeli laetare and O quam suavis est, complete an ear-catching disc. On the strength of this, Lobos music is well-overdue a revival, and we must hope for more soon.

Well presented as ever, both discs are a huge credit to the Hyperion team, as they are to the respective ensembles from this remarkable corner of London: long may their creative partnerships flourish!

James ODonnell and the 30-strong choir of Westminster Abbey have turned their abundant skills to the music of John Taverner (c1490-1545). ... Taverner, whose shadowy life story has its own dramas, was by instinct a European, influenced by the music of Josquin des Prez and the Franco-Flemish school. He responded to Cardinal Wolseys request for Marian music with the motet Mater Christi sanctissima (Most holy mother of Christ), and continued to mix English and continental styles in the magnificent Western Wynde Mass, based on a popular secular text. Two English choral masterpieces, superbly sung.  Fiona Maddocks
The Observer 3 July 2016