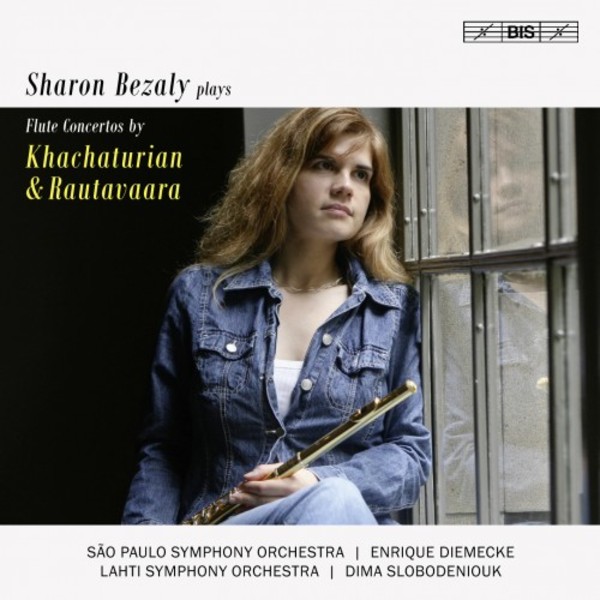 On close to 40 discs, flautist Sharon Bezaly has impressed and delighted critics and listeners worldwide, earning the description God's gift to the flute. Her wide-ranging discography naturally includes core repertoire, such as the concertos by Mozart, Nielsen, Rodrigo and Reinecke, but also a large number of works written especially for her. The works on the present disc owe their existence to two other flautists, however: Jean-Pierre Rampal, who transcribed Aram Khachaturian's Violin Concerto for his own instrument, and Gunilla von Bahr, for whom Einojuhani Rautavaara composed his Dances with the Winds in 1974. Khachaturian wrote his Concerto in 1940, dedicating it to David Oistrakh, who also gave the first performance. The composer always had a particular liking for the work, and when Rampal in 1968 asked him to compose a concerto for the flute, Khachaturian instead suggested that he should transcribe it. Rampal was given carte blanche when it came to making the necessary changes, and thus reworked the solo part completely. The orchestral score  here performed by the São Paulo Symphony Orchestra conducted by Enrique Diemecke  was left unaltered, however. In a manner of speaking, Rautavaaras Concerto is not a solo concerto, as it is written for all four instruments of the flute family. In the first and the last of the four movements the soloist plays the normal flauto grande and the bass flute, while the second movement is written for piccolo and the third for alto flute. After completing the work, the composer made a revised version in which the most unusual of these instruments, the bass flute, was replaced by the alto flute. The present disc provides a unique opportunity to compare the two versions, as Sharon Bezaly includes both of them, supported by the Lahti Symphony Orchestra under Dima Slobodeniouk, the orchestras new principal conductor.