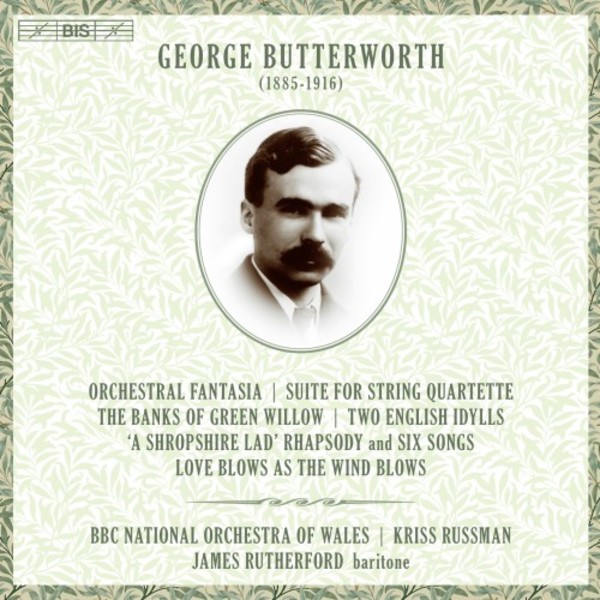 When George Butterworth joined the army in 1914, his most recent works included the song cycle Six Songs from A Shropshire Lad as well as the Rhapsody A Shropshire Lad, which he called an orchestral epilogue to his settings of A.E. Housmans poems. The Rhapsody has since been described as one of the greatest of all English orchestral works and when Butterworth left England to fight in the First World War, he was seen as one of the bright hopes of British music  a hope that in August 1916 was extinguished in the trenches at the Somme. When Butterworth joined up he stopped composing and also destroyed several manuscripts that he felt were inferior. An exception was an Orchestral Fantasia which he had started just before the war broke out: a 92-bar full score manuscript lasting some three-and-a-half minutes has been preserved. On the first page Butterworth wrote see short score which implies that the work may have been completed  but if so, the score in question has been lost. The composer and conductor Kriss Russman has therefore taken up where the manuscript breaks off, adding some 5 minutes of music through a process which he describes in his liner notes as developing Butterworths original ideas and combining them with additional material derived from an analysis of his other music. Performed by the BBC National Orchestra of Wales under Russman himself, the world première recording of the Fantasia closes the present disc which also includes some of Butterworths best loved pieces, such as The Banks of Green Willow. Russman has also made orchestral arrangements of the five-movement Suite for String Quartette and the Six Songs from A Shropshire Lad, both of which are recorded here for the first time. The soloist in the song cycle, and in the three songs that make up Love Blows as the Wind Blows, is James Rutherford.

[Kriss Russmans] knowledge of and depth of feeling for this ill-fated Edwardian are striking. In the most famous pieces, The Banks of Green Willow, the Shrophire Lad Rhapsody, and the Two English Idylls, he brings out their poignant lyricism with exceptional freshness and strength, avoiding any Cowpat School preciosity. ... To the AE Housman settings James Rutherford brings characteristic mellow-toned vigour and expressive delivery...  Michael Scott Rohan
BBC Music Magazine September 2016

George Butterworth died on the western front on 5 August 1916, a month into the Somme offensive. He was 31, and though he had not composed anything since enlisting at the outbreak of war in 1914, he was already regarded as one of the outstanding young talents in British music. ... Russmans completion of the Orchestral Fantasia that Butterworth left as a 92-bar torso when he went off to war is ... haunting in its way, and his eight-minute version is far more convincing than the 17-minute one performed at the English Music festival last year.  Andrew Clements
The Guardian 8 July 2016