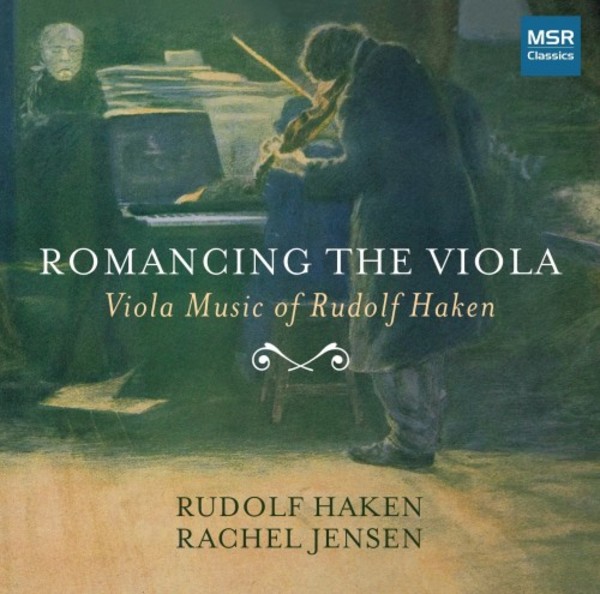 Born in late 1965, Rudolf Haken was a child prodigy who conducted his own orchestral music at the age of ten and had the good sense to select the viola as his primary instrument at an early age. He has become an outstanding concert artist, a bold and exciting performer who has toured internationally to great success. His viola works, many written in the lush and dramatic style of the late nineteenth century, are distinguished by a sensuous lyricism, an exuberant sense of humour, a natural and thorough mastery of compositional technique, and above all an intimate understanding of the technical and expressive capabilities of the viola - a body of work all the more remarkable in that much of it was composed when Haken was still in his teens. Best of all, scores and recordings of his music may be downloaded directly from his website. When a musician of this calibre takes the trouble to make his music so immediately accessible, its worth our while to check it out.

American violist and composer Rudolf Haken has heard his work performed around the world by a wide array of fine artists, including violinist Rachel Barton Pine, flautist Jean Ferrandis, oboist Nancy Ambrose King and trumpeter Paul Merkelo. Hakens concertos have been notably successful, with performances in North America, South America, Europe and Asia. A recording of concertos was chosen as a 2007 Critics Choice by the American Record Guide. He has received numerous commissions, and has heard his works performed at conferences of the American Saxophone Alliance, the International Double Reed Society, and the International Trumpet Guild. In 2004, WTTW in Chicago produced a video featuring Haken performing his electric viola transcriptions of Van Halen and Metallica that was shown in passenger areas at OHare and Midway airports in Chicago. An advocate of the Rivinus ergonomic five-string viola, he has been featured in the Journal of the American Viola Society and The Strad. Haken performs regularly on four-string, five-string, and six-string violas in North and South America, Europe and Asia. At the age of ten, Haken conducted his first orchestral works, and appeared frequently in his teenage years throughout the United States and Europe as composer, conductor, soloist and chamber musician. Haken is currently on the music faculty at the University of Illinois.

Rachel Jensen holds masters and doctorate degrees in Vocal Coaching and Accompanying, earned at the University of Illinois where she was the student and assistant of John Wustman. Jensen has visited on the music faculties of Oberlin Conservatory, University of Illinois and Illinois Wesleyan University, and maintains a busy teaching studio in Urbana, Illinois, where she gives instruction in piano and voice.