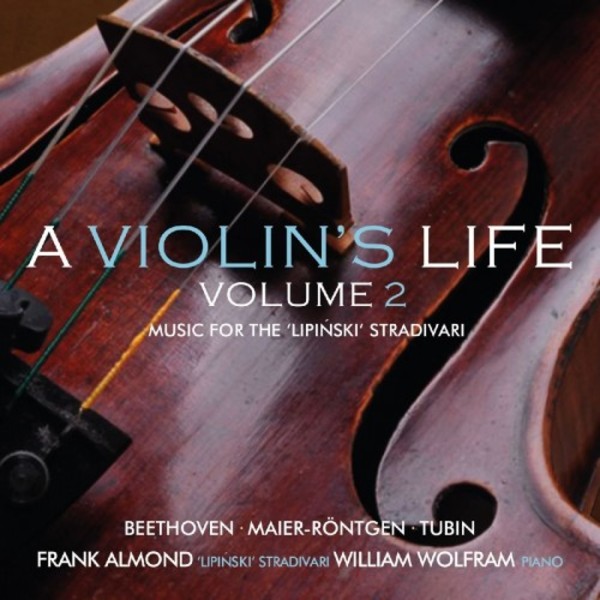 A Violins Life Volume 2: Music for the Lipinski Strad

Violin Sonata in B minor

Violin Sonata in B minor

Released in the wake of the sensational theft - and eventual recovery - of his Lipiński Strad, Frank Almond releases A Violins Life, Volume 2, featuring works by Beethoven, Amanda Maier-Röntgen and Eduard Tubin.

1715: the famed Italian luthier Antonio Stradivari constructs what will become one of his most legendary violins. Among its first owners is Giuseppe Tartini, he of the Devil's Trill Sonata.

c1817: the violin is bequeathed to Polish virtuoso violinist Karol Lipiński who inspired many works for the instrument.

2008: after passing through many countries and collections the Lipiński Strad arrives in the hands of Frank Almond, through an anonymous donor.

2013: Frank Almond releases A Violin's Life (AV2279), an album that traces the provenance of the Lipinski Strad, with music by Schumann, Tartini, Julius Röntgen, and Lipiński himself.

The Lipiński Strad lives on.

Almond plays as if his fiddles life was on the line - in his hands, the Lipinski flourishes and shines in notes spun out with casual virtuosity and graceful poetry. - The Irish Times

The glorious Lipinski Stradivarius violin...which passed through the hands and lives of a number of composers beginning with Giuseppe Tartini, and whose fascinating journey is chronicled on a gorgeous recent CD, A Violins Life, with performances by Frank Almond. - Strings magazine