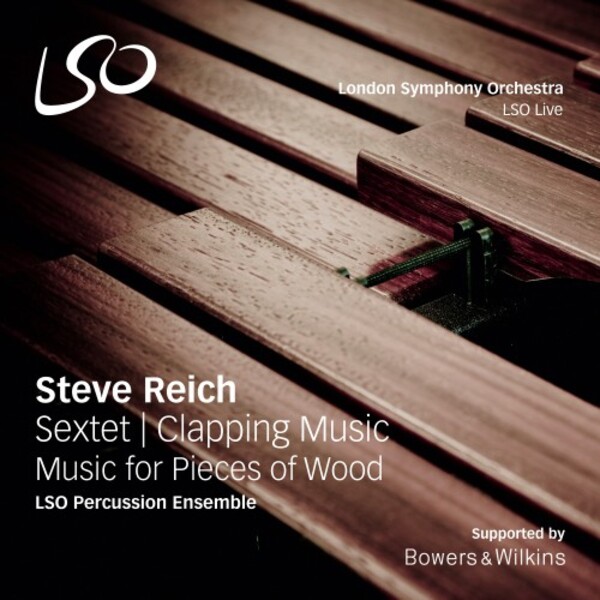 LSO Live explore the music of Americas most influential living composer with performances of three of his most iconic works: Sextet, Clapping Music and Music for Pieces of Wood.

Employing Reichs universally recognisable sound world, Sextet uses hypnotic repetitions of a sequence of harmonies, which gradually overlap and interweave, resulting in a complex yet utterly compelling musical landscape. Introducing more dissonance and aggressive rhythms than previous compositions, the relationship of the five movements is that of an arch form, A-B-C-B-A. Changes of tempo are made abruptly at the beginning of new movements by metric modulation and sections are also organised harmonically with a chord cycle for the first and fifth. Reich says of the work, "The ambiguity here is between which is melody and which is accompaniment. In music that uses a great deal of repetition, I believe it is precisely these kinds of ambiguity that give vitality and life."

Composed in 1972, Clapping Music strips back to the bare essentials, taking traditional African rhythms as its starting point. Conceived from a desire to compose music "that would need no instrument beyond the human body" it is perhaps the most elemental example of phasing in the composers catalogue. The whole work consists of a single rhythmic cell which becomes staggered as the work progresses, creating an entrancing and hypnotic effect. Having previously performed the work with the composer, Neil Percy delivers an inspired performance alongside his LSO co-principal, Sam Walton.

Music for Pieces of Wood takes this concept a step further, adding pitches, in the form of claves tuned A, B, C sharp, D sharp and D sharp an octave above. The claves are chosen for their resonant timbre and the piece is one of the loudest the composer has written, despite using no amplification whatsoever.

Neil Percy, LSO principal percussionist and ensemble director, says of his relationship with these pieces and the
composer: "The thing I enjoy most about playing the music of Steve Reich is its diversity, its complexity, its challenging nature Weve played so many pieces of Steves over the years with him being present, so its got a very personal set of challenges that I find completely irresistible. Thats why, on this particular project for LSO Live, we tried to put together a programme that reflected all of the pieces that the group themselves really like to play."

Neil Percy has enjoyed 20 years as principal percussionist of the London Symphony Orchestra and 12 years as head of timpani and percussion at the Royal Academy of Music. During this time, he has worked closely with many major artists and conductors and as a soloist with Steve Reich, Sir Colin Davis, Pierre Boulez, Karl Jenkins, Ravi Shankar, Kent Nagano and Elgar Howarth.