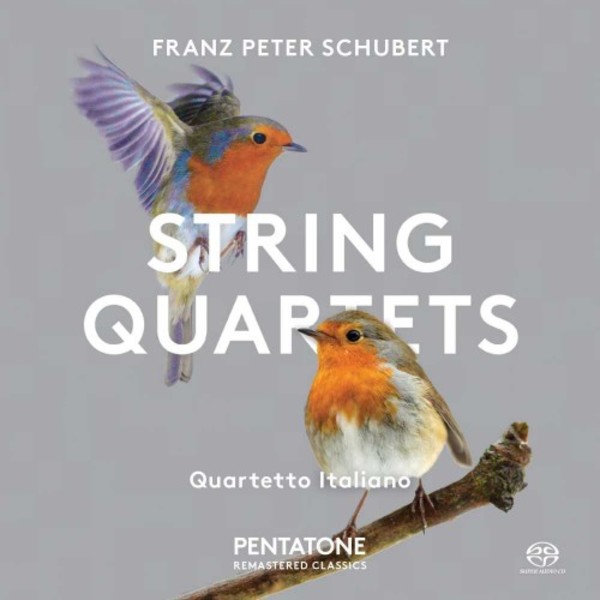 The twentieth century has heard great string quartets, such as the Busch Quartet, the Budapest String Quartet, the Amadeus Quartet, the Borodin Quartet and the Guarneri Quartet. The Quartetto Italiano certainly belongs to this top echelon of ensembles. After the musicians met and first played together in 1942, the quartet was founded in 1945. The musical development of the group was greatly influenced by German conductor Wilhelm Furtwängler, whom they met at the Salzburg Festival in 1951. They reached the pinnacle of their career in the late 1960s and the 1970s and by the time they stopped playing in 1980, they had recorded amongst many other works the complete quartets by Beethoven, Mozart, Brahms, Schumann and Webern.

Despite his short life (Schubert died at the age of 31), his very harsh self-criticism and the fact that he had to measure himself against Beethoven, the composer who was considered an institution in the Vienna of the early 19th century, Schubert, next to his numerous songs and his symphonic repertoire, is known to have written 20 string quartets. Fourteen of them were completed and can easily be divided into early, middle and late period quartets.

This new issue in Pentatones Remastered Classics series reveals a remastered January 1976 Philips Classics recording by the Quartetto Italiano performing Schubert Quartets D87, from the middle period, and D804 (also referred to as Rosamunde) from the late period, a great masterpiece and one of the most outstanding quartets of the entire string quartet repertoire.

Philips Classics began making multichannel recordings back in the 1970s, at a time when most companies were still only recording in two-channel stereo. The concept of surround sound was as yet unheard of, let alone the possibility that this might someday be reproduced at home in the living room. Now, thanks to the advent of the Super Audio CD  a CD with two layers, the first of which includes the traditional CD signal, and the second the signal for surround sound  there is finally a medium that makes it possible for these magnificent recordings to reach the public with all their original possibilities and quality intact. In remastering these multi-channel tapes  most of which had been sitting in their boxes for at least 30 years  our sound engineers had at their disposal the original testing and tuning tapes, and were therefore able to replicate the original process used with the analogue machines. The analogue machines were directly connected to state-of-the-art DSD analogue to digital converters, strictly bypassing any mixing consoles and/or other special equipment which might influence the sound, and transferring the information in its original multi-channel glory to the Super Audio CD.

I like the way the Quartetto Italiano, on this remastered 1976 recording, bring out the drumming figure in the A minor's first movement The Andante's poignant harmonies have space, the Allegretto has pathos and, in the finale, the players' sweet tone is combined with vivacity and playfulness. They make an excellent case for the early, experimental  and often patronised  E flat quartet.  David Cairns
The Sunday Times 10 July 2016