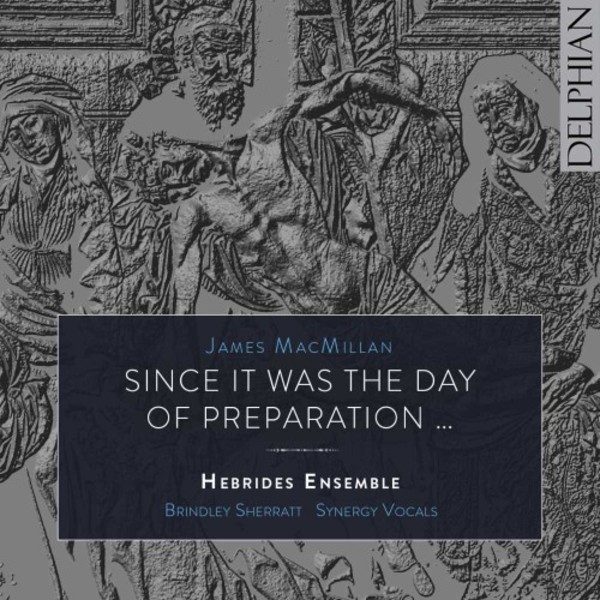 MacMillan - Since it was the day of preparation

The first disc in a new recording partnership between Hebrides Ensemble and Delphian Records presents Sir James MacMillans extraordinary setting  by turns intimate and dramatic  of the Resurrection story as told in St Johns Gospel. As at the works premiere at the 2012 Edinburgh International Festival, the Ensemble and its director William Conway (the works dedicatee) are joined by bass Brindley Sherratt in the role of Christ, and by a quartet of singers from Synergy Vocals. A significant landmark in MacMillans career, Since it was the day of Preparation  now inaugurates a series of recordings set to document Hebrides Ensembles outstanding contribution to Scottish cultural life.

As for the performance it must be regarded as definitive.  John Quinn
MusicWeb International June 2016

Since it was the day of preparation is on the face of it a chamber piece, with just ten performers in total needed. Yet in an extraordinarily affecting and perceptive manner it broaches universal issues and, in this wonderfully committed recording, already feels like a modern masterpiece.  Terry Blain
BBC Music Magazine July 2016

Few composers in recent times have so unequivocally brought their faith into the concert arena as has James MacMillan. Here we have the latest in a stream of major works which express his deeply held Catholicism, and for my money it is by far and away the most effective. Combining elements inspired by plainchant, Scottish folk melody, Arabic dance (the Interlude which concludes the first part), Renaissance music, Bach, Stravinsky and Britten (most notably at the start of the second part), the language is uniquely and undeniably MacMillans own, as is the highly unusual decision to set a Biblical text which has rarely been set before in any period of musical history.  Marc Rochester
Gramophone August 2016