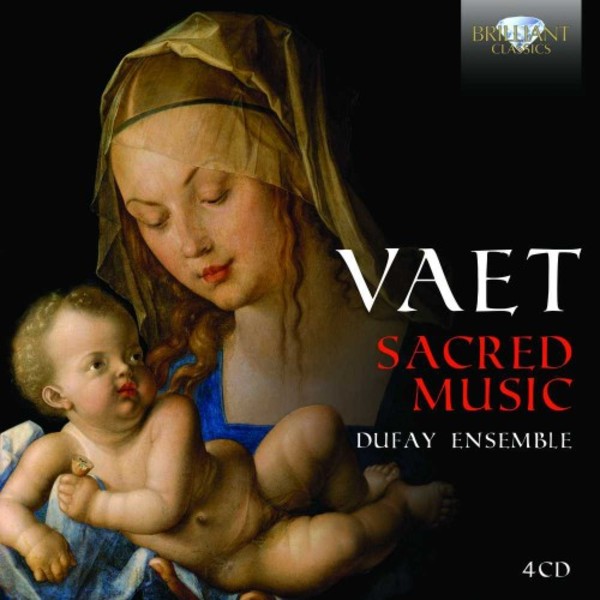 What we know about Jakobus Vaet  Flemish composer of the latter half of the 16th century  is sadly lacking. Unsure of his exact year of birth, we first come across him as a 13-year-old, when he entered his local choir; clearly he was a precocious talent, as the church kept him on until his voice broke four years later. By the time Vaet remerged in 1550, he held the prestigious post of tenor in the chapel choir of Charles V, Emperor of the Holy Roman Empire. His royal connections were set to continue, as he moved to Vienna some years later to serve as Kapellmeister to the Archduke Maximilian of Austria, soon to become emperor himself. Vaet spent the next fifteen years until his untimely death at the age of 37 composing a great deal; what remains of his works fills several volumes, including the sacred music featured on this 4-CD set.

Vaets sacred music is characterised by the use of melodies and material from other composers, including Christian Hollander and Clemens non Papa. However, his reworking of other works is stylistically unique, as he reduces polyphonic textures of composers such as Gombert to a far more transparent sound, creating breathing space  literal and expressive  unusual for its time. Most of all, Vaets music, while transcendent in content, is regularly rooted in the politics of its day: the Biblical text of Ascendetis post filium, for example, works to praise Maximilian for assuming power from his father Ferdinand, just as Solomon did from Saul. Vaet was clearly not only a skilled composer but also a masterful diplomat.

The works are sung with utmost care by the all-male vocal group Dufay Ensemble, conducted by Eckehard Kiem, who also sings bass. The ensemble  formed of just seven singers  may be small but it thinks big, having recorded music by Josquin Desprez, Orlando di Lasso and Palestrina. When released separately, CDs 2 and 3 of this set were previously highly praised, winning the coveted Diapason découverte and Diapason 5 respectively.