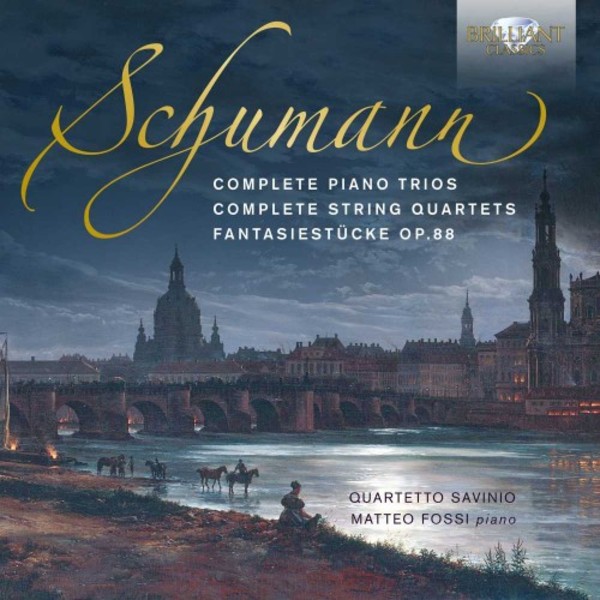 Schumann composed his three string quartets and the Fantasiestücke Op.88 in his chamber music year of 1842, while preparing for the two oratorios which he regarded as his greatest work in any medium, Paradise and the Peri (1843) and the Scenes from Goethes Faust, which preoccupied him on and off for the next decade. Posterity has however been less kind to these large-scale summations than the song cycles and chamber works, such as those recorded here, in which the composers obsessive reworking of small motifs finds consistently impassioned expression.

As befits their place within the canon of the genre, the string quartets are often densely and contrapuntally worked, whereas the piano-trio Fantasiestücke are more characteristic of Schumann the lyric poet, whether for voice or instruments. These four pieces are cast as a sonata manqué, with a soulful prelude, lively Scherzo, yearning duet for the two string instruments and combative finale. They have not received the attention they deserve from either performers or listeners, but they are fully the equal of the three piano trios proper in which, according to Alfred Einstein, can best be heard the composers self-declared dual nature as both Florestan and Eusebius, impetuous man of action and melancholy dreamer. Joy and exuberance are their keynotes.

The Quartetto Savinio has been acclaimed by a native critic as the true heir to the Quartetto Italiano, and its musicians were coached by the violist of that ensemble, Piero Farulli. With an all-Italian line-up, the quartet has worked with many contemporary composers from their own country, and won both awards and critical praise for a previous recording of the string quartets by Luigi Cherubini: it is an Italian ensemble through and through. The Florentine pianist Matteo Fossi has recorded for Decca (including much of Brahmss two-piano repertoire with his regular duet partner, Marco Gaggini) and Brilliant Classics, notably the piano quartets of Schumann with Quartetto Klimt (95012BR).