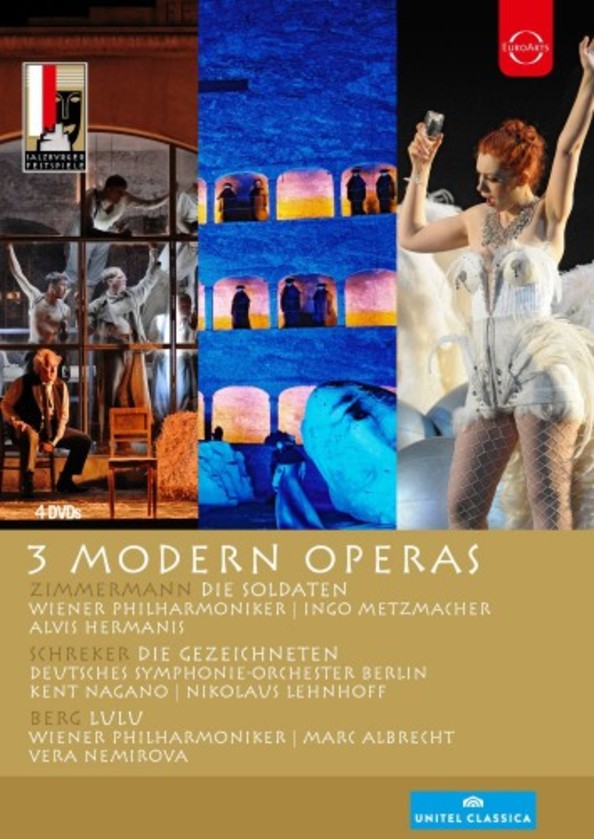 This DVD box contains three award-winning reference recordings of modern 20th-century operas, recorded at the Salzburg Festival in 2005, 2010 and 2012.

Bernd Alois Zimmermanns opera Die Soldaten (The Soldiers) was the highlight of the festival season and broke all records! (Süddeutsche Zeitung) Acknowledged as one of the most important twelve-tone works of the 20th century and often labelled unplayable for its sheer difficulty, the opera sets borderline challenges to both its performers and the theatrical establishment as a whole.

Salzburgs Felsenreitschule is the ideal performance venue for the mammoth production, the gigantic building essentially becoming a 40-metre-high stage.

Featuring the Vienna Philharmonic conducted by Ingo Metzmacher, and more than 170 musicians, including no fewer than 50 soloists. Winner of the Diapason dOr, Diamant dOpéra Magazine and the Grand Prix de lAcadémie Charles Cros.

Composed and first performed towards the end of the First World War, the demanding work with its huge orchestral and casting requirements enjoyed performances on many important stages. Forced into early retirement following the Nazis seizure of power, Schreker died prematurely and the work was forgotten.

The impressive opera opened the 2005 Salzburg Festival and was deservedly hailed rediscovery of the year by the New York Times. It features more than 30 soloists, along with the Concert Association of the Vienna State Opera Chorus and the Deutsches Symphonie-Orchester Berlin under the baton of Kent Nagano.

it was an engrossing evening, that conveys not only the vertiginous beauty of Schrekers music, but also the composers theatrical gifts, his penchant for probing the unconscious drives and boundless yearning of his characters in a world that is crumbling around them - The New York Times

This is a first-class ensemble festival achievement. It looks stunning in Raimund Bauers transformation of the Felsenreitschule and Lehnhoffs masterly use of this extraordinary space. - Sunday Times London

Alban Bergs Lulu is based on German writer Frank Wedekinds tragedy by the same name. It was first performed in the full version at the Paris Opéra in 1979, conducted by the late Pierre Boulez. The rarely performed opera calls for a very large orchestra and an extended cast of singers.

French star soprano Patricia Petibon embodies Lulu, the femme fatale who meets with a tragic end. Conductor Marc Albrecht leads the Wiener Philharmoniker through the rich sonorities of Bergs music, treating them as a natural extension of Wagner, Brahms and Strauss.

A noteworthy feature of this production is the stage design by Daniel Richter, one of the most successful and important German artists of his time.